Into the land of the Kims - a journey in North Korea 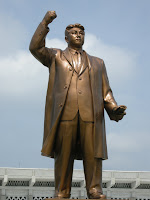 Sinuiju, North Korea - Tuesday, Aug. 25: There was, of course, always the likelihood that the North Koreans wouldn't let in the country two foreigners with suspicious back stories (I entered on the premise that I was a Russian historian, Sean as an English teacher living in China). Or worse, that they'd let us in and keep us there until Bill Clinton's next trip to Pyongyang.

But the border and customs formalities went surprisingly smoothly, likely because we ran into a Chinese tour group that was crossing at the same time and cheerfully adopted the two crazy laowai (foreigners) as their own. By the time they got to the customs room, the guards were too busy going through bags stuffed with boil-in-bucket noodles (some of the Chinese were apparently worried they wouldn't be fed in North Korea) to give our documents more than a peremptory look.

(I presented a passport that had no markings identifying me as a reporter anywhere on it, and kept my other one – which has an incriminating Chinese journalist visa in it – jammed deep in my pocket. More on that later.) The weather was a warm and clear, and Sean and I were soon working on what we would come to call our Pyongyang tan.

Our first stop inside North Korea was a massive bronze statue on the main city square of the “Great Leader” Kim Il-sung, the founding leader of North Korea, shaking his fist like he's playing rock-paper-scissors.

In the official narrative here, the Great Leader didn't really go anywhere when he died and passed his tyrannical powers on to his son Kim Jong-il in 1994. Under the country's constitution, the elder Kim is North Korea's “eternal president,” though it's unclear what his day-to-day responsibilities are beyond appearing in old propaganda films. Red posters around the country tell citizens that Kim Il-sung will be with them forever.

“In our country, it is custom to bow before the statue of the Great Leader. Will you join us in this custom?” our tour guide said flatly. Sean and I had known this moment was coming. There was nothing to do but bow. When in Sinuiju…

After a quick tour of the Sinuiju Historical Museum, which was dedicated to the life stories of the two Kims (the elder apparently visited Sinuiju 217 times, the younger 186), as well as Kim Jong-suk, the mother of Kim Jong-il (only two visits to Sinuiju), we ate a lunch of beef, rice and kimchi and boarded the 2:10 p.m. train for the five-hour-20-minute hour journey to Pyongyang.

The wood-panelled train car looked like something out of the 1950s Soviet Union, with portraits of Kim Il-sung and a youthful Kim Jong-il hanging where Stalin and Lenin would once have been. The scene on the platform as we pulled away was similarly out of a Second World War movie: we could see weaponless soldiers milling around as martial music played over the loudspeakers. Merchants in grey Mao suits tried to shove their wares on the train as it began to roll away, and women waved farewell to men heading south to the capital city.

We were accompanied for the journey by a group of government-assigned tour guides who were assigned to watch us during our time in North Korea, as well as Workers' Party cadres who silently kept watch over all of us. They spent much of the ride to Pyongyang grilling us about our backgrounds. Why did you want to come to North Korea? How long were you in China? Where did you go to university? What was the theme of your book about Russia?

(Sometimes the conversations veered into the bizarre. Later in the trip, Sean, a Londoner, was asked what year the Tower of London was built. When he failed that test, our minders began to openly question his Britishness. He tried to brush it off by jokingly saying he was more into science than history, and wound up having to explain the concept of a vacuum as proof of that scientific bent.)

Out the window, a scene of abject poverty rolled by. Grey industrial with no sign of functioning factories and endless fields of rice and corn that were being worked by hand or by oxcart in the absence of farm equipment and fuel. There were few cars or even bicycles on the roads, and people could be seen walking tens of kilometres from anywhere.

“Long Live Kim Jong-il, a leader for the 21st Century!” proclaimed a red propaganda poster that we saw in almost every town we passed.

Our minders strictly warned us not to turn our cameras out the window, and it was easy to see why. This was not the image of a powerful country the Kim regime is trying so desperately to present to the world.
Posted by markmac at 11:21 a.m.