The revolution shall be tweeted 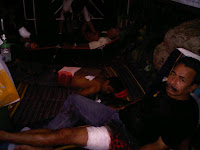 Bangkok - Once more, I'm in Bangkok, and once more The Globe and Mail has done me the favour of assembling a collection of some of what I posted before and during the Thai government's military crackdown on the Red Shirt protesters.

In case you missed them, here they are. As I mentioned in another article for The Globe, Twitter played an unprecedented role in the Thailand turmoil.

On the downside, it was a propaganda outlet for both sides and served to amplify the hatred and prejudice that exist in Thai society, arguably helping push the situation towards its bloody conclusion.

But it allowed hosted some top-notch reporting and, more importantly, allowed Bangkok residents to warn each other about what was happening in their neighbourhoods. In at least two occasions, one of which I was involved in inside the supposed sanctuary of the Wat Pathum temple, Twitter may have helped saved lives.

Here's how it went down (note these are not all my tweets from this period, but a selection chosen by editors at The Globe and Mail):

* 4:29 p.m. Question of the Day: if Red uprising is about equality, why is there a VIP toilet? #thailand

* 11:39 p.m. Series of bangs heard from direction of Rama IV road, scene of much fighting in recent days. #thailand

* 12:05 a.m. I should add to last tweet that if I had a baht for every crackdown rumour I've heard in recent weeks I could buy land in Rajprasong.

* 2:46 a.m. Another explosion in the distance. By now, I should have function key that types that sentence. #thailand

* 9:59 a.m. Thai govt spokesman "we would like to reassure citizens of Bangkok... operations are designed to stabilize the area."

* 11:28 a.m. Closing in on Red stage at protest centre. As soldiers advance, Reds still defiantly sitting on ground, playing music. about 9 hours ago

* 12:07 p.m. Praise my lovely wife who made me a medical kit with everything in. I just dressed a colleague's bullet wound. Shot in leg. All safe now.

* 12:27 p.m. Soldiers allowing Red Shirts to exit camp if they come forward with hands raised. Lt Col I talked to on way in said 10 surrendered to him.

* 12:33 p.m. Smoke rising from two locations north of main Red camp in central Bangkok. Din Daeng and one other area.

* 12:39 p.m. No Red leaders behind main stage when I visited. Reports some surrendering to police. Still thousands of protesters at main site.

* 12:58 p.m. Thai TV reporting that Red Shirts have occupied Bangkok's Century Park hotel. Years ago, in other Thailand, my cousin got married there...

* 1:52 p.m. Getting a bit dangerous now around Chidlom

* 2:01 p.m. Massive fire now at Chidlom BTS. Something else burning besides tires.

* 2:36 p.m. Smoke rising from near Central World shopping mall in Bangkok. Reports that protesters tried to set it on fire.

* 3:12 p.m. Rajprasong main red stage. Deserted. No sign of soldiers.
http://www.blogger.com/img/blank.gif
* 3:43 p.m. In Wat Patum Wanaram, with hundreds of civilians. All just ran deeper into temple area because of nearby gunfire.

* 3:45 p.m. Hundreds of civilians begginf for UN to protect Buddhist temple in middle of site.

* 3:59 p.m. Thais in temple offering us water and a place to sit. "We're only kind to foreigners, not to each other," woman says.

* 5:50 p.m. Sustained gunfire outside temple serving as sanctuary in middle of Bangkok. People moving further away from entrance.

* 6:08 p.m. Air smells of fire. Twenty buildings around city said to be in fire, including Central World.

* 6:10 p.m. At least one person inside temple has bullet wound. No idea what happened. Gunfire escalating.

* 6:27 p.m. Fighting rages all around temple. Tear gas in the air. At least three shot, either inside or just outside sanctuary.

* 7:44 p.m. At least five wounded around me at makeshift medical centre in park behind Wat Patum temple, one a friend and colleague.. gunfire continuesm

* 7:54 p.m. Somehow we're the only corros left in temple. People around us terified. Red Cross can't get ambulance in to injured because of gunfire.

* 8:49 p.m. Please RT. People around me are dying because they can't get to hospital across the road because of fighting

* 8:51 p.m. More people will die inside Wat Patum unless we get ceasefire to get to hospital across the road.

I am journalist of Khaosod Newspaper, Thailand. My name is Chumchan Chamniprasart - email : kim@matichon.co.th I would like to interview you about the bloodshed situation in Wat Patumwanaram, Bangkok. Is it possible to interview you by email?

Thanks for sharing the link - but unfortunately it seems to be not working? Does anybody here at markmackinnon.blogspot.com have a mirror or another source?

I have a inquiry for the webmaster/admin here at markmackinnon.blogspot.com.

Can I use part of the information from your post right above if I give a link back to your site?

Simply killing some in between class time on Digg and I found your article . Not normally what I choose to read about, but it surely was absolutely worth my time. Thanks.