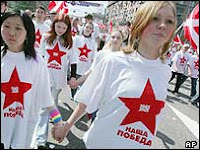 Two stories caught my eye today which might seem like separate issues but which in fact are thickly linked. One was a lengthy report in Moscow News Weekly about the summer camps being hosted by Nashi and the other pro-Kremlin youth groups.

The other was the Kremlin's paranoid decision to order the Russian edition of the BBC World Service off the FM dial.

The link? Both the Kremlin's bolstering of "patriotic" youth movements and its crackdown on non-state media outlets are moves directed at heading off any kind of Orange Revolution-inspired uprising in Russia around December's Duma elections and/or next year's presidential vote.

Kremlin strategists Gleb Pavlovsky, Sergei Markov and Vyacheslav Nikonov all gave speeches to the Nashi camp at Lake Seliger outside Moscow (as did, notably, leading Kremlin-backed presidential contenders Sergei Ivanov and Dmitriy Medvedev). Two years ago, following the uprising in Ukraine, Pavlovsky and co. were charged with making sure the orange tide never reached Red Square. One of the first things they did was establish Nashi - the name means "Ours" - to counter the pro-Western youth groups like Ukraine's Pora that formed the backbone of the revolutions that hit Serbia in 2000, Georgia in 2003 and Ukraine a year later.

At the first Nashi camp in the summer of 2005, Pavlovsky gave a speech that neatly summer up the role he expected the kids to play: "You must be ready to disperse fascist (a word Pavlovsky tried hard to attach to Ukrainian President Viktor Yushchenko and his supporters) rallies and physically oppose attempted anti-constitutional coups," he said. In other words, their job was to prevent Red Square from going Orange.

Nothing's changed. As MN reports, "[this summer's] camp's key note is political indoctrination." To that end, not only are the 10,000 Nashi members (as well as members of similar groups like Rossia Molodaya, or Young Russia, and Novye Lyudi or New People) indoctrinated about the values of patriotism and the evils of the West, they're lectured about the need to procreate as a way of reversing Russia's rapid population decline. They also get a talking-to about underwear.

The bizarre details, courtesy of MN:

The Seliger camp has its own TV network called Zyr, a radio station, news agency, and two newspapers. There is also a number of ongoing programs such as the School of Mass Action, the Institute of Entrepreneurship, the Schools of Animators, the Institute of Social Management, and the Antifa School, among others. One of this season's projects, Bashnya Gazproma (Gazprom Tower), offers successful contestants internship at the natural gas monopoly. Such projects as The Museum of Double Standards and Fat Man from Hell, are designed to show the pernicious effect of the Western lifestyle. A daily serial titled I Want Three encourages young families to have at least three children: thus, dozens of couples celebrated their weddings in the camp and were given separate tents. Dmitry Medvedev and Sergei Ivanov, two men who are widely seen as leading contenders to replace Putin next year, wore T-shirts with an emblazoned call to boost birth rates. A group of activists were urging girls to surrender their G-strings as a factor in female sterility, providing instead more conservative outfits and destroying the discarded G-strings in front of their former owners. Considering that a demographic revolution to the Seliger campers is an imperative at the behest of Vladimir Putin, G-strings have become a symbol of counterrevolution.

The BBC crackdown is linked because Pavlovsky, Markov and Nikonov understand that anti-government media - namely B-92 radio in Serbia, the Rustavi-2 television station in Georgia and Ukraine's Fifth Channel - were perhaps even more important than the youth groups in bringing Serbs, Georgians and Ukrainians into the streets. Having already taken direct or indirect control of all the country's major broadcasters, the Kremlin is now apparently turning its attention to the BBC.

While I'm quite cynical about the kind of "reporting" Fifth Channel did during the Orange Revolution - it wasn't so much as covering political events as inciting them - any efforts to squelch a media outlet is obviously an attack on free speech.

The BBC, in particular, has an unimpeachable reputation for reporting all sides of a news story. They really do. As a reporter myself, I can tell you that there are a lot of outlets who simply spew silly anti-Russian propaganda (or whatever the State Department's narrative of the day is), but the BBC isn't among them.

For the Kremlin to see the Beeb as an enemy only shows how paranoid they've become about the coming elections. And how far they'll go to keep control.
Posted by markmac at 4:18 p.m.

Despite my gratitude for some of the BBC work, they aren't without fault when it comes to providing some biased coverage of the former USSR and former Yugoslavia. That some more biased outlets exist is a sad reflection of the overall lack of high profile objectivity.

I agree that censorship sucks whether in Russia, the UK or USA. Russian government funded Eng. lang. media/PR projects can be easily enhanced.

BTW, take a look at the Nashi photo at this above post and note the Asian looking young lady holding the hand of her more Russian looking counterpart.

Propaganda aside, that more correctly reflects the spirit of Russia.

It seems to me that your post contains a bit of contradiction. Isn't it inconsistent to speak of the Kremlin being "paranoid" and at the same time revile "silly anti-Russian propaganda"? After all, maybe if we had listened to more such "propaganda" and acted on it, the BBC would still be on the air in Russia. In fact, maybe Vladimir Putin wouldn't even have come to power -- or Stalin for that matter.

If the Kremlin is taking such an outrageous action against the BBC today, what can we expect tomorrow if we don't take action? Perhaps you're missing the forest for trees?

What many who purport to defend Russia from "anti-Russian propaganda" often fail to realize is that these people might be the very best friends Russia has. Russophile reptiles who justify the Kremlin's outrageous conduct are by far the most dangerous threats to Russian survival.

I understand your argument, and the danger you highlight, but I think there's just as great a risk in sliding too far the other way. If everything Russians and their leadership do is always wrong - if we don't cheer them when they get something right - then we're doomed to conflict with them. You may accept that as inevitable (some of your posts suggest as much) but I don't yet.

I go to some lengths in my book - and this blog - not to take sides, only to report on what I see. So far, the main purpose of my writings has been only to lament for where we're heading.

As for the work of my media brethren: I think it's possible to be critical of the Kremlin where appropriate without sliding into caricature. The BBC walks that line better than most broadcast outfits.

Instead of just detailing the wrongs of Russian media, for edification ouroposes, it would be great to detail instances of BBC bias on some issues like the former USSR and former Yugoslavia.

OK, that's fair enough, but I must challenge you. It's not acceptable to simply say "I don't yet." You have to specify what would need to happen before you'd realize that Russia is a lost cause, that we have to fight and win. Otherwise, asking me to wait is without credibility and can't be taken seriously.

I think it's rather naive to believe, as Chamberlain did, that if we only speak the right words of tender encouragement to Russians they will respond by stopping their efforts to kill us. Do you really believe that if we complimented Russians more, the BBC would still be on the air . . . and Hitler wouldn't have built all those concentration camps?

Do you concede that, if you're wrong in the advice you're giving, you're helping Russia to buy time and making our ultimate battle much more difficult to win and more costly when it comes?

In the end, I think that the problem with what you're saying is that it's not reciprocated in Russia. Nobody over there is saying "let's compliment the Americans when they do something right." No significant journalists are pursuing truth, they're working for state-controlled propaganda outlets and filling the Russian's head with ridiculous lies and hatred, just as in Soviet times. So basically you are patronizing Russians, presuming we are more civilized and intelligent than they are and we have to set an example for them to follow. If I were Russian, I'd be more offended by that attitude than by mine -- and I believe that, in fact, they are.

I repeat: You yourself have declared Russia to be acting in a "paranoid" manner. Paranoia is a serious mental defect, it can't be overcome with soothing words and compliments. We've seen Russia go down this road before, shame on us if we let it happen again.

If anyone is acting "paranoid", it's those hypocritically Russia under a microscope.

Is RTTV on the air for much of American mass media to view on their TV sets? Not that RTTV is peect journalism. Such a species is perhaps non-existent.

An edit for clariy sake:

If anyone is acting "paranoid", it's those hypocritically putting Russia under a microscope.

It would be more accurate to say that the Russian government is behaving conservatively and attempting to secure the solvency of itself in the face of deliberate measures by Western powers to undermine or errode the political process in Russia.

Using the word "paranoid" is dramatic license. Obviously, a government can not be diagnosed as having a psychiatric disorder and it is silly to suggest that was seriously implied.

There is no doubt that NGO's funded by Western governments have fueled political dissent, this has been documented endlessly. We wouldn't accept such actions within our own country; in fact, our laws specifically prohibit foreign governments from taking such actions, via NGOs or lobbyists. So, we, the US and Western nations, took advantage of the former openness of Russian and CIS laws and regulations. Russia has had to change laws in the face of this and attempted to control dialogue and news and insert young people on the street.

In a sense, these are war-time measures for Russia. The West has been assaulting Russia for years now, in a soft campaign, attempting to dismantle the country in order to profit and disarm that nation further. Neo-con's click their heels in glee at the prospect of Russia being divided into a dozen smaller, less powerful nations.