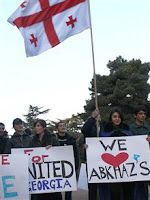 Russia's decision yesterday to establish thicker ties with Georgia's breakaway regions of Abkhazia and South Ossetia was as predictable as it is inflammatory.

As Georgian President Mikhail Saakashvili rightly protests, the Russian foreign ministry's declaration (Civil Georgia has provided a full text of it here) that it will recognize as legal all documents issued by the separatist governments is a step towards the de facto annexation of those two territories to Russia.

According to the Russian foreign ministry statement, President Vladimir Putin has ordered his government to "interact with the actual bodies of power" in both places, and to build trade links with the regions.

This is hardly a surprising move. For years, the Kremlin has been granting Russian passports and citizenships to residents of Abkhazia and South Ossetia, even those international law clearly recognizes both provinces as parts of Georgia. Russian citizens now make up a majority of the population in both places.

The Kremlin clearly foresaw a day when its hold over the two territories would be useful in a standoff with Tbilisi, the West or both.

Throughout the Kosovo crisis, Russia warned that if the West recognized Kosovo's unilateral declaration of independence from Serbia, a strong Russian ally, it would re-evaluate its relationships with not only Abkhazia and South Ossetia, but perhaps the Transdniestr region of Moldova and the Srpska Respublika in Bosnia-Hercegovina as well. (The Kosovo example has also contributed to rising tensions between Georgia's neighbours, Armenia and Azerbaijan, over the disputed enclave of Nagorno-Karabakh)

When the West (seemingly because it couldn't figure out what else to do with Kosovo) through its weight behind Pristina's UDI, the Kremlin had two choices: accept its dimished stature and do nothing - as Boris Yeltsin did while NATO bombed Belgrade in 1999 - or do something bold to make it clear that Russia's interests can no longer be ignored as they were a decade ago. For better and for worse, Putin has spent eight years choosing the latter route.

To Saakashvili's consolation, the U.S., the EU and NATO are tripping over themselves today to denounce Russia for "openly siding with separatists" and to call on the Kremlin to respect Georgia's sovereignty. Intentionally or not, their words and arguments are borrowed from Russia's reaction to the West's support for Kosovo.

The unanswered question is how far does Western support for Georgia's territorial integrity go? How would NATO - an organization that just promised Georgia future membership - react if Russia annexed two chunks of Georgian soil, or backed their independence?

The status quo in Eastern Europe is starting to slide away, just as it did in the early 1990s, when borders regularly fell away and new states were created seemingly every month. Back then, there was only one player at the table dictating the rules.

Yesterday, dangerously, the Kremlin anted up and declared that Russia back in the game. Mikhail Saakashvili is betting hard that it's a bluff.

The New Cold War on the road: if any readers are in London or Almaty next week, please feel free to come, say hello and argue with me. On Monday I'm giving a talk at the Cafe Diplo at The Gallery in Farringdon.

Friday, I'm in Kazakhstan to take part in the opening session of the Eurasian Media Forum alongside Zbigniew Brzezinski, Gleb Pavlovsky and others. The theme is Cold War deja-vu.
Posted by markmac at 7:48 p.m.

Indeed, the chickens of the Kosovo blunder are coming home to roost. The Chinese government also expressed grave concern about Kosovo independence.

Is it just me, or has the price of oil sharply risen, and the value of the Dollar sharply dropped, since that particularly bone-headed move by Dubya?

I think you're right to question how far Western support for Georgia's territorial integrity goes. I'm not sure it goes particularly far.

Georgia is a valuable ally for NATO, but I think it would be a better one if it were able to get away from the distraction of its (in reality already) lost provinces. This would allow it to focus on its own development, rather than engaging in endless wars of words with Russia that destabilise the region, rather than secure it.

In the long run, the same will apply for Moldova/Trans-Dneister.

"Friday, I'm in Kazakhstan to take part in the opening session of the Eurasian Media Forum alongside Zbigniew Brzezinski, Gleb Pavlovsky and others. The theme is Cold War deja-vu."

Wonks wonking off. For quality sake, its way past due for some others to get invited to such gatherings.