Mr. Hu, tear down this firewall! 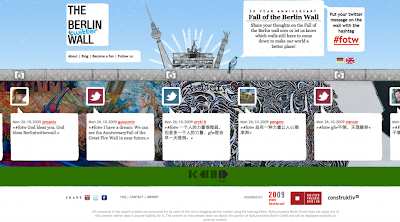 Beijing: It was supposed to be a place to remember where you were and what it meant to you on Nov. 9, 1989, when the Berlin Wall fell between East and West Germany, marking the beginning of the collapse of communism in Eastern Europe.

But something very different – and fascinating – is happening instead at the Berlin Twitter Wall, a website that went online last week as part of the city of Berlin’s anniversary celebrations. Instead of reminiscences about life behind the old Iron Curtain, the site is being overloaded with complaints about a new barrier sealing people off from the outside world: China’s thick web of Internet censorship, referred to locally as the Great Firewall (or GFW, in character-saving Twitterspeak).

Most of the writers posted in Chinese, and claimed to be doing so from inside China, where Twitter and dozens of other popular websites have been blocked by the Communist government headed by President Hu Jintao. (Click here for an incomplete list of the banned sites.)

Blocked sites can be accessed from inside China via virtual private networks, provided you have both a private computer and the tech savvy to do so. The entire province of Xinjiang – home to 21 million people – has been almost completely without Internet service since deadly ethnic riots hit the city of Urumqi on July 5.

Here is a sampling of some of the postings the Berlin Twitter Wall has seen in the past couple of days. The tag #fotw refers to “fall of the wall”:

“The collapse of the wall needs everyone’s help.” – posted Monday, Oct. 26 by xiaopohen,

“I have a dream: We will see the anniversary if the fall of the Great Fire Wall in near future.” – posted Monday, Oct. 26 by guoyumin

Here are a few others translated by the China Digital Times:

“#fotw We climb the Great Firewall because it has blocked out all of the dissent, and we do so to eventually get rid of the Wall.” – by miaofeng

“The wall built for others will eventually become a grave for the builders. #fotw” – by liujiang

“#fotw It has been twenty years, and we are still in the Wall.” – by gengmao

“#FOTW All Chinese on the electronic Berlin Wall, spectacular!” – by peterlue

“My apologies to German people a million times [for taking over this site]. But I think if Germans learn about our situation, they would feel sorry for us a million times.” – by ChrisicGong

Predictably, by Monday evening local time, the Berlin Twitter Wall was no longer accessible in Beijing.

Fine post indeed. I have been search futilely for an article in the mainland press that commemorates the fall of the Berlin Wall, of course a major anniversary for Germans but one with ominous overtones for Zhongnanhai. Glad to discover your blog.

Thanks for dropping by Adam. Glad to discover Sinologistical Violoncellist as well...

(http://adamcathcart.wordpress.com/ for those who don't know it.)

I came across a thoughtful analysis about the relative absence of Berlin Wall anniversary recollections of 1989 in recent media in the PRC.

It's from the France2Pekin blog:

I got the link from Arnaud de la Grange, whose work I also enjoy:

Yeah its really nice to visit such a nice place!

Mr. Hu, "Did you just say something? That's an expensive looking latte in your hand there... How can you afford it when you owe me so much money?"