One week in Bangkok 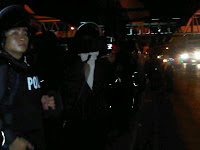 Bangkok - In case you've missed it, I've been covering the ongoing political crisis in Thailand live from the streets of Bangkok for The Globe and Mail.

You can read my newspaper reports on the standoff between the government and the Red Shirt protesters on the website, but here's a snapshot of the minute-by-minute stuff I filed via my Twitter account (www.twitter.com/@markmackinnon).

(Note, this isn't a complete transcript of what I sent to Twitter, just a selection of "greatest tweets" compiled by the staff of globeandmail.com. They've posted more of my photos over there too.)

• 10:39 a.m: Thumping rain in Bangkok this morning has sent many Red Shirts running for cover. Protest site emptiest its been in days.

• 7:23 p.m: The waiter in the Japanese restaurant I'm in just blamed the lack of tuna on the Red Shirts. Thaksin, what have you done??

• 10:16 a.m: Red Shirt leaders claim part of army would defend Reds if new crackdown. "Tanks would fire at one another."

• 5:56 p.m: Thailand: Pro-government "Yellow Shirts" give military one week to end Red Shirt protests or will act "to preserve the nation and monarchy"

• 1:01 p.m: Army Humvee parked where the food inspector's car should be in front of KFC on Silom Road.

• 10:22 a.m: is being evicted from my second hotel this week. You'd think I was throwing TVs out the window.

• 10:32 a.m: Red Shirts have erected black tarp over main stage area in central Bangkok. Will obscure both the sun and the view of anyone spying above.

• 10:05 p.m: Amnesty "urges [Thai government] to provide accountability for any violations by security forces as well as abuses by violent protesters."

• 5:22 p.m: As both sides talk war, there are scattered reports that negotiations are finally taking place... #thailand

• 7:23 p.m: Extremely tense now at Silom front line. Hundreds of Yellows chanting "get out!" at Reds from behind line of soldiers.

• 7:24 p.m: Tuk-tuk backfired near front line between army, Reds, and everyone ducked. #thailand

• 8:32 p.m: Red Shirts have expanded positions north of Lumphini Park. Checking IDs of drivers before allowing them to pass. #thailand

• 8:58 p.m: Police have moved in to break up clashes between Red Shirts and local residents near Silom intersection. Tense. #thailand

• 11:34 p.m: Orange flares all over the sky as helicopter buzzes over Bangkok Red Shirt protests.

• 7:34 p.m: Yep, real-live Yellow Shirts have joined the crowd on Silom Road. Mood more festive here than at Red rally, but of course Reds on Day 41...

• 7:35 p.m: Army deployed to Silom to keep district's businesses from suffering fate of Rajprasong. But stores shutting down here anyway...

• 8:23 p.m: Was there and heard blasts. Thought little of them. #toomuchtimeinwarzones

• 8:28 p.m: What I saw/heard were fireworks fired from Red side over police barricade. Not M79s, as some reporting.

• 9:19 p.m: Situation tense on Red side of barricade after mystery explosions. Reds leaving 40 metre gap behind wall of bamboo and tires. Plan to light?

• 10:31 p.m: Man beside me with club assuring me it's still safe to travel in his hometown. "No trouble! just relax! Welcome!"

• 11:29 p.m:Thai police hiding under overpass (with me) as fighting escalates (pictured)

• 11:42 p.m: Riot police moving down Silom driving back pro-govt rioters. Reds playing music and dancing. If this the end, a victory for them.

• 12:14 a.m: Yellows on Twitter talking of arming themselves because of government "weakness" in facing Red Shirts.

• 12:44 a.m: Battle of Silom Road over for now.Question is what next? Helicopters in the air now, Reds appear to be targeting them with fireworks...
Posted by markmac at 5:00 p.m.