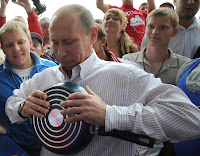 Saturday afternoon, at a political rally in Moscow's Luzhniki Sports Palace, Russia's two-decade experiment with democracy came to an end. A different, more authoritarian, system with only a mirage of choice, is now firmly in place.

Russia's new political model is often called Putinism, after the man who built it and who will soon return as its unequivocal head. Elections are still to be held, and Putinism is far freer in most aspects than the totalitarianism that Russians lived under for most of the Soviet era. But it is a one-man show, completely dominated by Vladimir Putin, the man who served as Russia's president from 2000 to 2008, and who is now primed to return to the Kremlin after a token four years as prime minister.

Dmitry Medvedev, a longtime Putin aide who was drafted into the presidency in 2008 (when Mr. Putin stepped aside in deference to an annoying clause in the post-Soviet constitution that limits presidents to a maximum of two consecutive terms) told a gathering of the dominant United Russia party on Saturday that Mr. Putin should be their nominee in the presidential election scheduled for next March.

"I think it would be correct for the congress to support the candidacy of the party chairman, Vladimir Putin, to the post of president of the country," a stoic Mr. Medvedev said. Mr. Putin quickly accepted, and said it would be "a great honour" to take his old job back.

The announcement brought an end to hopes that Mr. Medvedev, who had shown a slightly more liberal side than Mr. Putin and who had occasionally flashed a willingness to challenge his former boss, would stand against Mr. Putin next spring and give Russians a real choice. In recent months, Mr. Medvedev and Mr. Putin had both fed speculation about a head-to-head race by refusing to answer questions about which of them would run for the presidency.

Instead, Mr. Medvedev - at Mr. Putin's suggestion - agreed to lead United Russia into December's parliamentary election, putting him on track to switch jobs with Mr. Putin and become prime minister. Mr. Putin told the party congress that the decision had been made "a long time ago, several years back."

The game of musical chairs will only affirm what most Russians believed about Medvedev's time in the Kremlin: the real power remained with Mr. Putin throughout, even while in the nominal No. 2 job.

(A key part of Mr. Medvedev's legacy is a constitutional change extending presidential terms from four to six years, starting with the 2012 election. The change makes it possible for Mr. Putin, 58, to remain Russia's president until he's 70.)

Other parties will contest the Duma elections in December and the Kremlin will ensure that other candidates will be found to run against Mr. Putin in the spring. The appearance of choice is an important facet of Putinism, or "managed democracy," as the system's creators prefer to call it.

But those other parties and candidates will face a host of obstacles - ranging from the Kremlin's near-complete control of the media to physical intimidation and ballot-stuffing - that will make an electoral upset close to impossible. As the cases of Mikhail Khodorkovsky, the former oligarch now serving his seventh year in a Siberian prison, and Anna Politkovskaya, the Kremlin critic who was murdered for her investigative journalism in 2006, have made all too clear, there's no tolerance for genuine threats to the system.

Ten days ago, billionaire Mikhail Prokhorov - one of the last figures who could have made Russia's election season somewhat interesting - bowed out in disgust, withdrawing as a candidate for a Kremlin-backed opposition group (another unique feature of Putinism). "We have a puppeteer in the country, who long ago privatized the political system," Mr. Prokhorov said, in remarks taken to refer to Vladislav Surkov, a political strategist who remained a key figure in both the Putin and Medvedev presidencies.

Few Russians seem to mind. Aided by national media he hammered into submission after coming to office, Mr. Putin - who has been shown on state television fighting forest fires, tracking tigers and flying fighter jets - is easily the country's most popular politician, credited with stabilizing the country's economy (which remains heavily reliant on energy exports) and restoring its international prestige, in part via the 2008 war against neighbouring Georgia, a former vassal.

Western-style democracy, which the country briefly experienced in the 1990s, when Boris Yeltsin was president, is associated with corruption, lawlessness and economic collapse.

The man who oversaw the end of the Soviet Union has warned that Russia is headed for disaster if Mr. Putin and his coterie insisted on clinging to power.

"The unwillingness to start reform or the desire to have partial change is often explained by the fear of losing power and the desire to prevent a new collapse of Russia," Mikhail Gorbachev wrote in an article carried this week by two Russian newspapers. "But it is the very absence of change which threatens to provoke instability and put the future of the country in question."
Posted by markmac at 7:05 p.m.

I note you name nobody who would do the job better.

"Few Russians seem to mind. Aided by national media he hammered into submission after coming to office, Mr. Putin..."

Before the national media had been "hammered into submission" deaths were exceeding births in Russia by almost a million a year. It is telling that the Western critics of Putin seem not to really care how, or even whether, Russians live, but they damn well better oligarch-dominated media instead of state dominated media!