One from the archives...

Tikrit, Iraq - There’s a Calvin and Hobbes cartoon that I refer to whenever I’m in need of guidance. In this particular adventure, etched in my brain, Calvin is doing his homework — math, I think — but staring out the window at the falling snow. He discusses his options with his orange, black and ever-present tiger/swami.

Ditching the homework and running outside to build a snowman, Calvin opines, would be far more pleasing than sitting at his desk learning to carry the one while he adds and subtracts. Simple enough. But he thinks about it some more.

In the long run, surely, he’d be better off having doing his assignment, getting good grades, graduating with honours, going to a good college and getting some fabulous job afterwards.

Calvin considers this too for a moment, then looks out the window again.

“In the really, really long run,” he tells Hobbes. “I’ll remember the snowman.”

Standing on the edge of Saddam Hussein’s swimming pool, the strip once more jumped into my brain. Here I was, in the Iraqi strongman’s hometown of Ouja, inside a palace built on the place of his birth, and all I wanted to do was go for a dip in the figure-eight shaped indoor pool. It was 35 degrees Celsius outside after all, and my shirt was sticking to my back.

One side of my brain, the one I usually consult during working hours, was telling me several things. First and foremost, I was in the midst of an Important Assignment, and shouldn’t be wasting time on water sports. Second, there were men outside with guns. They were angry at people for stealing things from the palace. They’d already shot at a few looters. They might not enjoy the idea of an infidel splashing around in the presidential pool.

On the Calvin-o-meter, however, it was no contest. In the really, really long run — after the deadlines had passed and the vigilantes had gone home and become shopkeepers again — I’d remember the naughty feeling of swimming in Saddam’s pool. I wound up on the diving board (it had a nice spring to it) and gave the lukewarm water a Stittsville, Ont.-style cannonball. It seemed the method of entry Mr. Hussein would best appreciate, were he there to take in the moment.

Nihad, a young man my own age I’d met in the nearby town of Tikrit the day the fighting there stopped, was appalled and overjoyed at the same time. He’d spent his adult life in Mr. Hussein’s Baath party, and told me earlier that day that he’d been ready to sacrifice his life for the president, until the last minute when he realized that Mr. Hussein and his cronies had no intention of dying for Iraq.

The expression on Nihad’s face as he took in the scene of a Canadian reporter cannonballing in Saddam’s pool was both indescribable and priceless. He was appalled and loving it at the same time.

It’s these little victories over the madness of it all that keep one sane in a war zone.

Some times it’s something big and memorable, like standing on the belly of the toppled statue of a dictator while you call your parents on a satellite phone. Or playing a game of soccer with the kids at the Baghdad orphanage, ignoring for a moment, the gunfire and the looting on the street outside.

Other times it’s a smaller outlet, like leaning out the window and swearing a blue streak at the snipers that have kept you up all night with their deadly game of tag. A useless (and perhaps dangerous) gesture, to be sure, but fulfilling nonetheless.

Having plunged into the water at Saddam’s palace pool, I floated there for a moment, taking it all in. The glass doors shattered by the U.S. bombing, a black telephone that somehow ended up in the deep end.

Just then, a wave splashed over me. Nihad had plunged in feet first, and was laughing deliriously as he came to the surface. He climbed out, and took a run at it, and plunged back in, head first this time.

A medical student and good Baathist who had spent his whole life doing his homework, he had finally started thinking about the really, really long term. 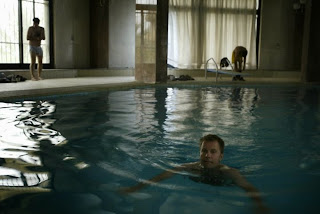