The wrong way to say thank you 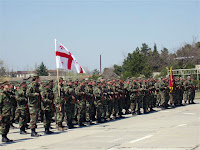 Mikhail Saakashvili and his government owe the Bush Administration a favour. That's well known. Without the overt and covert support of the U.S. (and billionaire financier George Soros), the 2003 "Rose Revolution" probably never would have happened, and Eduard Shevardnadze would likely still be Georgia's president.

And yes, with Russia trying to economically strangle its smaller neighbour with crushing sanctions on Georgian exports of wine and mineral water, Saakashvili and co. need all the big, powerful friends they can get right now.

Still, the decision to more than double the number of Georgian troops fighting alongside the U.S. in its misguided war in Iraq boggles the mind.

On Friday, Georgia's parliament voted to increase the troop deployment from 850 to 2,000. Many of these will be deployed in and around Baghdad, very likely putting them in the line of fire.

While many of the troops are said to be willing to go because they receive nearly triple their regular pay while in Iraq (thanks to the U.S., which pays nearly two-thirds of their salaries), Saakashvili is nonetheless putting his country on the wrong side of history here.

Unlike most, if not all, of the Georgian parliamentarians, I have been to Iraq five times since 2003, and can tell you that each subsequent trip was more dangerous for me personally. Simply put, the country is disintegrating, likely into three parts.

I've also met Mr. Saakashvili twice, and if he granted me a third meeting, I'd tell him bluntly that sending an extra 1,150 Georgian soldiers to Baghdad won't stop this, and that sending them there is misguided and more than a little sycophantic.

Of the few who once shared Bush's vision of reshaping the Middle East through toppling Saddam Hussein and ridding the country of its phantom weapons of mass destruction, Britain is leaving and Italy and Spain have left.

Georgia, too, has done its time, having initially committed troops back in August 2003.

Parliamentary speaker Nino Burdzhanadze said Georgia made the decision to up the number of troops because the country "knows the price of friendship, and will never forget the support that has been provided" by America.

If sticking with Bush to the end of his foolhardy war is really the price of America's friendship, it's far too high. A real friend would tell him that.
Posted by markmac at 6:50 p.m.