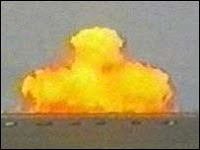 So I was sitting in the radio studio yesterday ready to record another interview promoting my book The New Cold War for the BBC/PRI program The World, when a pair of odd questions came over the line: are you ready to talk about thermobaric bombs and Viktor Zubkov?

You can hear my off-the-cuff remarks during my interview with Lisa Mullins here.

Even with an extra 24 hours to think about it, I still can't quite figure out what Putin's up to by appointing someone as unknown as Zubkov to the PM's post this close to the Duma and presidential elections.

I have three, admittedly incomplete, theories:

- Putin hasn't made up his mind yet between leading contenders Sergei Ivanov and Dmitriy Medvedev. Under this scenario, Zubkov is a third candidate that Putin wants the public to get to know before the presidential elections in the spring. Remember that Putin himself was a nobody when Boris Yeltsin made him prime minister back in 1999. (Zubkov himself said yesterday that he "does not rule out the possibility" of running for the big job next year.)

- Putin HAS decided on one of Ivanov or Medvedev (the smart money's on Ivanov, an ex-KGB man like Putin himself who has served as defense minister and deputy PM), and Zubov is that man's choice for prime minister. Putting Zubkov in now, the thinking goes, would allow a smooth transition between this administration and the next one.

- Putin's not going anywhere, and he's deliberately muddying the field to show how far he stands above any challengers to his throne.

It's too early to say which of these scenarios is right. We'll have to wait to hear more from Putin, and Zubkov himself.

As for the big blast in the desert, the Father of All Bombs was tested for one reason only - because it was bigger than the U.S.-produced Mother of All Bombs. Just another hello to the West from Russia's suddenly revived armed forces.
Posted by markmac at 5:37 p.m.

His last name is Zubkov, not Zubov.

BTW, he has recently got on the Internet a nickname "Pipiskin" (which sounds very funny for Russians) - this is how he was mistakely named in a Lenta.ru article.

The second option is unlikely: Zubkov, judging by his bio, is personally tied with Putin and is not a member of Ivanov-Sechin's or Medvedev's clans. So the other version is that he is to represent Putin's interests in the government of the 'successor' (provided that the Operation Successor won't fail).

Mark is Canadian. Perhaps he was thinking about Sergie Zubov. :)