The other shoe drops: Putin wants to be PM 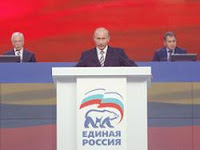 Well a three-year-old guessing game appears to be coming to an end. Ever since Vladimir Putin cruised to a second term in the 2004 presidential election, the question has been inevitable: what will Putin do when the term is over and the constitution forbids him from running again?

Today, Putin pretty much put an end to the speculation, strongly suggesting that when he leaves the Kremlin, his new office will only be a short drive a way down Kutuzovsky Prospekt to prime minister's office, the White House.

Addressing the congress of the United Russia movement - a party he oversaw the creation of, and that has little ideology beyond loyalty to Putin - Vladimir Vladimirovich said it was "entirely realistic" that he could end up as prime minister after his term as president ends next year.

Putin, who previously had not been an official party member, said he will head the United Russia list into the December elections for the Duma.

He set two conditions for taking the job, both of which should be easily met:

- United Russia must win the December elections. Given the state of the opposition, it would be a shock if they didn't. (United Russia currently controls 305 of the 450 seats in the Duma, giving it the the two-thirds majority necessary to amend the constitution.)

- The next president must be someone Putin feels he can work with. Given that he's hard at work hand-choosing his successor, that too seems likely to be the case.

(As an aside, The Moscow Times reported today that the Other Russia opposition movement has nominated chessmaster Garry Kasparov as its leader. That would be interesting news if two other pro-Western liberals, ex-prime minister Mikhail Kasyanov and perennial loser Grigoriy Yavlinsky, hadn't already thrown their hats in the ring. With all three siphoning votes off from each other, Putin's man - be it Sergei Ivanov or someone else - should coast to an easy victory)

Putin's hint about the PM job doesn't end the guessing over who will be the next president, but it does lessen the importance of the question. It's now clear that Putin will retain much of the real power.

Right now the presidency is far more powerful than the PM's job. I'm not sure Putin, after eight years as top banana on the tree, is interested in playing second mango. Now the fun shifts to watching out for moves between now and the presidential elections next spring that suggest an effort to pass powers from the presidency to the prime minister and his cabinet.

It's all very constitutional and very clever.

By the way, there's no limit on how many terms someone can serve as prime minister of the Russian Federation. Oh, and the prime minister is also first in line for the presidency should the president resign or somehow become incapacitated.
Posted by markmac at 1:05 a.m.

I wonder if Putin's hand-picked presidential successor will resign on his first day. Presumably Putin could then avoid the term limit on some technicality ("I'm just acting President, not President", or "The Constitution prevents me from being elected more than twice, but I wasn't elected this time.") But if you're going to make such a transparent move, why not just amend the Constitution?

Or why not just rename your country "Russian Banana Republic," since that's what this basically makes it?

I'd say "Russian Zoo Which Aspires to Reach the Lofty State of Banana Republic One Day but Will Probably be Gobbled up by China Long Before That" might work even better, at least in terms of accuracy. Or maybe they could just call themselves "Who Do We Think We are Fooling???"

It just occurred to me that you should change the title of this post to "the other jackboot drops." That would be more fitting, wouldn't it?