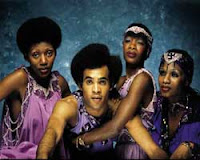 Oh, to be in Tamarasheni today. The South Ossetian village, one of the few in the breakaway republic that is still under the Georgian government's control, is the site of a remarkable concert today by 80s disco stars Boney M (pictured).

Yep, the musical geniuses behind such hits as "Rasputin" (which while a hazy memory in the West is still a big hit across much of the former Soviet Union) have somehow found their way to a pokey village on the edge of a conflict zone.

Believe it or not, the show is part of Georgian President Mikhail Saakashvili's efforts to win over the "hearts and minds" of South Ossetians. Word is that the music will be cranked up loud enough to be heard in the rebel capital, Tskhinvali.

The message, distilled: See, you silly Ossetians, life really is better over here in the rest of Georgia. So good that we have time for disco dancing. When was the last time you got your groove on? Drop all this silly separatism and we can all dance together.

My good friend Michael Mainville, the Agence France Presse correspondent in the Caucasus, filed this report to AFP from Tbilisi:

The concert is part of a wider effort to convince South Ossetian rebels that they would lead more peaceful, prosperous - and possibly funky - lives
under Georgian control.

"Our message is that we are against war, extremism and violence. We want to resolve all problems peacefully, and peaceful life resumes where people sing songs," said Dmitry Sanakoyev, the head of a rival pro-Georgian administration in South Ossetia.

Violence continues to plague the area and sniper fire is common after nightfall. This summer saw some of the heaviest fighting in the region in years, with both sides accusing each other of launching mortar and grenade attacks.

Nevermind that. A little Ossetian cheese pie, a glass of Georgian red wine (preferably a Saperavi) and Boney M belting out "Daddy Cool." I can't decide if that's heaven or hell, but I wanna be there either way.

If this works, perhaps Saakashvili can convince his buddy George W. Bush to bring some other 80s stars out of retirement - Wang Chung and Level 42 jump to mind - to see if they can't cheer up those grumpy Iraqis.
Posted by markmac at 7:24 p.m.

Just as a follow up, blogger Matthew Collin (the author of the excellent book on Serbia's B-92 radio station, "This is Serbia Calling") was at the concert dancing with President Misha among others.

Check out his review over at his Cacucasus Reports blog: http://caucasusreports.blogspot.com/2007/10/boney-m-and-disco-president.html