The crisis this time 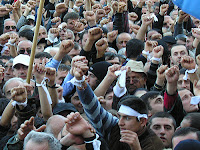 Poor Georgia. The country, perhaps more than any other former Soviet republic, has been in constant turmoil since the day the USSR dissolved. Wars, revolutions, mass protests - these things are as Georgian as khachapurri and over-sweet red wine.

Mikhail Saakashvili's rise to power via the Rose Revolution in 2003 was supposed to bring an end to all this. And if you were watching the slick government-bought commercials that are in heavy rotation on CNN ("And the winner is: Georgia"), you might believe that he'd succeeded in finally making the tiny Caucasian state into a stable, westward-looking, ready-for-Europe country.

But here we are exactly four years after the heady days of the Rose Revolution, and the streets are again full. Saakashvili can, with some reason, call the protests Russian-inspired but that doesn't negate the fact that the centre of Tbilisi is shut down and his government is facing its most serious challenge to date. And, of course, the Rose Revolution came about with more than a little American help.

Most opinion polls show that Saakashvili's National Movement is still easily the most popular party in the country, though he certainly wouldn't win 96 per cent support, as he did four years ago, in another presidential vote. But even the president has admitted that he's done a poor job of explaining why there isn't going to be fresh elections until next fall - five years after the last round. (Georgia previously had elections every four years, meaning this should be parliamentary election time, but Saakashvili changed the constitution two years ago so that presidential and parliamentary elections would be held together from now on.)

Saakashvili's inferences during his lengthy interview with Georgian TV about not wanting the country to be in an election cycle while Russia was holding its own parliamentary and presidential votes are fascinating. So too is his open linkage of the Kosovo crisis to the separatist regions of Georgia, Abkhazia and South Ossetia. Saakashvili clearly sees an international showdown coming, and doesn't want to have to deal with it and an election at the same time.

Still, the most interesting thing for me about these protests is the leading role of figures like Tinatin Khidasheli, who were once allies of Saakashvili's and who were instrumental members of the NGO coalition that brought about the Rose Revolution four years ago.

Back then, Saakashvili was their chosen saviour who would save Georgia from chaos and corruption. Now they're pining for the golden days of poor old Eduard Shevardnadze, whom history may once more come to judge kindly.

One more thing. I urge all of you to check out Natalia Antelava's beautifully written tribute to Alisher Saipov, the Uzbek journalist who was murdered last week, likely because of the work he did writing about corruption, torture and the betrayal of the people by Uzbek President Islam Karimov's government.

She gets it exactly right. The international media relies on people like Alisher Saipov to understand the countries that we're hurriedly sent to when a crisis breaks out. Without people like him (I can't help thinking and worrying of my own Uzbek friends right now), the story doesn't get out, and the thugocrats win.

As for the whodunnit, Antelava's piece leaves little question in my mind:

[Saipov's] paper was becoming increasingly popular ahead of the December presidential election, in which Mr Karimov is seeking re-election.

And, with its popularity, Alisher's name too was gaining prominence.

He was beginning to feature heavily on Uzbek state-controlled television, portrayed as a terrorist, a dangerous man with a hidden agenda of overthrowing the Uzbek state.

The last time I saw him he told me that there were even rumours that the Uzbek government had put a price on his head.

Georgia does face serious international showdowns - Kosovo, Russian elections, NATO summit in Bucharest. The authorities like to view the current processes as planned from Moscow, but in fact, their character is mostly domestic.

This is a result of four years of populism, false promises, cynicism and authoritarian rule. Look what they want others to believe -- this is all Russia's campaign! It is simply insulting – Russia is not the root of all evils, as much destructive as it may be.

Saakashvili, who claims to represent the Georgian people, should not be concerned about the external threat so much as to give himself the freedom to do anything he wishes domestically. The rose days are gone, PR campaigns are not that effective, he needs to wake up and evaluate matters as they are, not as he wishes.

"though he certainly wouldn't win 96 per cent support, as he did four years ago, in another presidential vote."

No Post-Soviet Russian or Belarusian presidential tally has come close to matching that percentage.

I frequently see Antaleva on the BBC.

Pardon misspelling of her name (Antelava)