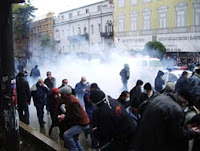 The latest out of Georgia is that riot police, acting on the orders of President Mikhail Saakashvili, have dispersed several thousand anti-government protestors using tear gas, water cannons, fists and batons.

In a televised address, Saakashvili said the protests were part of a Russian plot to create unrest in the country. He promised he had "incontrovertible evidence" of such nefariousness that he would release "soon."

In the interim, a few things strike me about President Misha's crackdown, most of all that it's a final break with many of the people who helped bring him to power during the Rose Revolution four years ago. In contrast, Ukrainian President Viktor Yushchenko - ever-conscious that it was the people who brought him to power - has tolerated all kinds of protests against his rule, some of which have blocked the centre of Kiev and left the country almost ungovernable for weeks at a time.

The people still own the streets in Ukraine, for better and for worse. That's no longer so in Georgia.

This quote, from Giga Bokeria, the head of Saakashvili's National Movement, was particularly jarring to me:

"This is absolutely normal for any Western democratic country," he told The Messenger newspaper in defense of the crackdown. Bokeria said the authorities had no choice ut to act once the protestors "made direct calls for the overthrow of the government."

This from one of the key plotters of the Rose Revolution, a man who helped plan the occupation of the centre of Tbilisi for three weeks in 2003. Back then, it was he who was calling for the overthrow of the government, so I guess it was OK.

More obvious hypocrisy: The pro-opposition Imedi TV was also taken off the air, apparently after police raided the studios (Imedi recently ran an interview from the exiled opposition figure Irakli Okruashvili in which he vowed that Saakashvili's "days are numbered.") Not so long ago, Bokeria and Saakashvili were among the crowd in the street, decrying the previous government for briefly shutting down the Rustavi-2 channel that was to Saakashvili's uprising what Imedi is today's protestors.

Regardless of the allegations of Russian involvement (and we must remember here that Saakashvili came to power with plenty of American help), Saakashvili is showing that he can and will crack down where Eduard Shevardnadze did not.

While researching my book, I interviewed Saakashvili and many others who helped plan and carry out the Rose Revolution. They all told me that one of the reasons they had the courage to remain in the streets for three chilly weeks back in 2003 was their conviction that Shevardnadze was not a complete autocrat. Unlike, say, Alexander Lukashenko of Belarus or Islam Karimov of Uzbekistan, they believed that the Silver Fox would not use force against his own people.

With some of his old Rose Revolution allies now arrayed against him, the tear gas and the water cannons were a message from Saakashvili to his former comrades that could be boiled down to "I know your game, I know how this works. Don't expect me to go as gently as Shevardnadze did."

And bringing down Saakashvili is exactly what the opposition now plans to do.

I'm torn about all this. I've written admiringly about the evident progress Georgia has made under Saakashvili. But it all risks coming undone if he starts behaving like just another post-Soviet autocrat.

It saddened me to see the scenes on Rustavelis Gamziri today.

A shout-out to a fellow blogger: Matthew Collin of This is Tbilisi Calling fame is filing great reports from the scene for BBC World.
Posted by markmac at 8:39 p.m.

I just read your book (and wrote a bit on it). A joy to read, very interesting, a lot to think about. But there are of course many more reasons than just the West-backed revolutions you write about for Russia turning inward and nationalistic.

Are you in Tbilisi now, or going there? Written any newspaper reports on the situation there?

The situation with Saakashvili must really be bad, seeing how some Soros affiliated organs have been critical of the Georgian president. Let's hope his possible replacement doesn't result in another Gamsakhurdia/Shevardnade/Saakashvili like scenario. Post-Soviet Georgia kind of reminds me of the political climate in some Cold War era Latin American countries. Mass discontent leading to periodically sudden changes of power, with outside powers looking in.

As others have noted, Russia during Putin's presidency seems more akin to France under de Gaulle's presidency