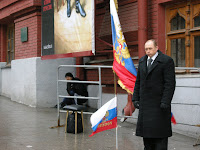 Moscow: The first thing that strikes me upon returning to Moscow is the new sense of order in the Russian capital.

In my book The New Cold War: Revolutions, Rigged Elections and Pipeline Politics in the Former Soviet Union, I wrote about my concerns that Vladimir Putin's obsession with stability and the "power vertical" (stabilnost and vertikalny vlast) were populist code for eliminating such annoyances as free elections and independent media.

That's proven to be true, but it must be remembered that a wide majority of Russians continue to back Putin's policies (and those of his chosen successor as president, Dmitriy Medvedev, who in many ways still remains his mentor's underling). With the benefit of some time away, it's easier to see some of the reasons why. Simply put, Moscow is a safer and more prosperous place to live in 2009 than it was when Vladimir Vladimirovich succeeded Boris Yeltsin nine years ago.

A few little things that struck me:

* There is now an official taxi stand at the still-dilapidated Sherevmetyevo-2 airport that charges you a pre-set rate for trips to the city centre (i.e., no more arguing with bandits who will wait all day for a foreigner rich and stupid enough to pay their price).

* I wasn't stopped once, during more than a week in Moscow and St. Petersburg, by police demanding to see our dokumenti and looking to extract bribes for invented problems with said documents, something that used to happen on a regular basis. Perhaps I look less like a Chechen like I used to. Or perhaps the crackdown on corruption has reached the police force. The only time we were stopped was when our cab driver was actually caught on a radar gun going over the speed limit. Yes, police in Moscow now use radar guns and care how fast you drive.

* The touts who used to harass tourists lining up to see the Kremlin and the Hermitage museum have all disappeared. (Though St. Petersburg is still an easy place to get your pocket picked. My wife and I witnessed a woman lose her camera on the Nevskiy Prospekt).

* An overall sense that Moscow, in particular, is a less chaotic place than it used to be, certainly than it was when we first arrived in late 2001.

* This Putin lookalike on Red Square thought I would pay 1,000 rubles (about $33) to have my picture taken with him. This one cost nothing.

That said, Russia is also one of the countries that has been worst hit by the economic crisis thus far (GDP shrank 7 per cent in the first quarter of 2009 ), and Moscow remains one of the most expensive cities in the world.

As in China, many in Russia have been willing to accept some restrictions on personal freedoms so long as the economy kept growing and their lives continued to improve. If that deal is broken, will the popularity of President Medvedev and Prime Minister Putin also take a hit?

The past few days have seen some of the largest anti-government rallies in recent years (such as the Communist Party gathering yesterday in Nizhny Novgorod) and heavy-handed government responses (such as a recent decision to dispatch Interior Ministry troops from Moscow to break up anti-government protests in the Pacific Ocean port of Vladivostok) -- the latter being a sure sign of government nervousness.

A test of where things are heading could come in the unexpected form of the mayoral elections for the city of Sochi, which is scheduled to host the 2014 Winter Olympics. Some 26 people threw their hats into the ring, including leading opposition figure Boris Nemtsov (briefly deputy prime minister during the Yeltsin years), celebrity ballerina Anastasia Volochkova (famously canned by the Bolshoi Theatre for being overweight), billionaire businessman Alexander Lebedev and acting mayor Anatoly Pakhomov, who has the all-important backing of Putin's United Russia party.

Despite the ludicrous start to the campaign, there is a serious side: whoever emerges from the crowded field on April 26 will get a chance to promote their version of Russia on the world stage in five years time. Given the way elections are run these days in Russia, the safe money is always on the Kremlin's man.
Posted by markmac at 7:56 p.m.