What colour for Chisinau? 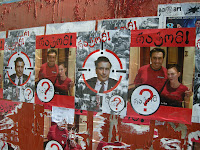 Tbilisi: As I write this, students have just been evicted from the parliament building in the former Soviet republic of Moldova, a day after storming it to show their despair at the idea of four more years of Communist rule there.

I’ve seen a few such popular revolts in my time (Georgia, Ukraine, Lebanon), and happen to have spent last week hopping through the post-revolutionary capitals of Kiev and Tbilisi on vacation.

The simple conclusion: these uprisings, even when they’re successful, rarely mark a wholesale change from the past.

In Ukraine, tents still occupy part of the Maidan (otherwise known as Independence Square), just as they have almost continuously since the Orange Revolution in late 2004. But the politicians the world fell in love with back then – the brave Viktor Yushchenko, with his face bearing the scars of a poisoning attack, and the glamorous Yulia Tymoshenko, with her golden Princess Leia-like braids – quickly turned on each other after the people put them in power, and politics quickly returned to the dirty old status quo in Kiev.

What looked like a popular revolution back then (albeit one with plenty of outside support) turned out to be more about one clan of oligarchs ousting the other.

My closest Ukrainian friends, who five years ago were heavily politicized and energized by what had happened on the streets of Kiev, were disheartened and interested in talking about anything but Ukrainian politics when we had dinner last week. On the Maidan, you can still buy KGB T-shirts and Lenin paraphernalia, but not one vendor bothers to sell anything orange anymore. There’s just no interest, not even from tourists.

Other than a single column in front of the main post office – which has been encased in plexiglass to protect the revolutionary graffiti painted there five years ago – it’s as if the Orange Revolution never happened.

Georgia, despite last year’s disheartening war with Russia, provides more reason for optimism. Tbilisi in 2009 is a completely different place than the city I first visited back in the fall of 2002.

Collapsing buildings in the historic Old Town have been replaced by sidewalk cafés and jazz bars. The old Intourist hotel – which for more than a decade had been overflowing with refugees from the early 1990s war in Abkhazia – is now an almost-complete five-star Radisson. (The refugees were given compensation to move elsewhere in town.)

But, like Moldova, the country is held back because large chunks of Georgian territory are de facto Russian protectorates. Last summer’s war over South Ossetia proved a disastrous miscalculation by President Mikhail Saakashvili (that's him looking alternately frazzled and amorous in the posters I saw in downtown Tbilisi), and now tens of thousands of Georgians are back on the streets demanding that he step down, just as he forced Eduard Shevardnadze aside back in 2003. (Check out reporting from the scene by my longtime friend Michael Mainville of Dowling, Ont. – now the Caucasus bureau chief for Agence France-Presse.)

Neither the Rose Revolution in Georgia nor the Orange Revolution in Ukraine brought the people on the streets the change they were seeking. The change in governments only began a whole new cycle of instability and overt Russian intervention in both countries.

That’s something the angry students in Chisinau should probably keep in mind.
Posted by markmac at 3:31 p.m.