Please look after this bear 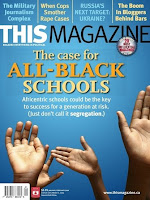 An article I wrote about the Russia-Georgia war and what it could mean for Ukraine appeared in this month's issue of This magazine.

While these conflicts aren’t completely about oil, the media shouldn’t buy the simplistic democracy-versus-authoritarianism line the State Department is flogging either. It’s a clash of empires, one falling from the height of its power, the other rising from the rubble of defeat. In this increasingly overt battle, national prestige and natural resources trump the will of Georgian and Ukrainian voters.

This isn’t a call for appeasement. If Russia interferes in Ukraine’s elections, it needs to be confronted with tough diplomacy or even sanctions. But the same rules should apply to Western governments, who in 2004 not only unequivocally backed President Viktor Yushchenko, but also poured money (as they did during Georgia’s revolt a year earlier) into youth groups that led street protests against the pro-Russian regime. Unlike in 2004, we shouldn’t seek to vanquish Russia and its allies in the country. Instead, Ukraine’s leaders should be coaxed toward a power-sharing arrangement that reflects the truly divided nature of the country.

You can buy This on Canadian newsstands for $6.

Or, sigh, read the whole piece for free here.