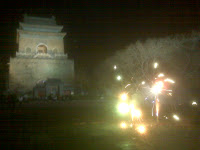 It's Day 5 of the Chinese New Year, the Year of the Ox, and the celebrations continue. All day and every night, the Chinese are still celebrating, setting off enough ordnance to make most armies blush -– and send to Odessa the Travelling Cat scrambling for furniture to hide under.

As someone who spent the last four years living in the Middle East, I have to admit that the occasionally spectacular fireworks have made me jump more than once too. The explosives may be intended to scare away evil spirits and bring in good luck, but the first days of the Year of the Ox have made Beijing sound a little too much like Baghdad or Beirut. An unbroken night's sleep is out of the question.

On Sunday night, on the eve of the Chinese New Year, a firework sailed into a café near Beijing's Houhai Lake that my wife and I had been sitting in not an hour before. The café was set ablaze, one of 75 fires in the city that night that were caused by the celebrations.

To prevent such kinds of incidents, fireworks were actually banned inside Beijing and most urban areas of China from 1993 until 2005. But while the government frequently said the restriction reduced injuries and property loss, the ban was wildly unpopular -- and largely ignored. For the past three years, the government has bent to reality and lifted the ban for the Spring Festival period.

This year, the government is not only allowing the show to go on, it's helping to make sure no one in this city of 17.5 million (and that's a low-end estimate) runs out of explosives until they're fully done celebrating the Ox's arrival. The Beijing Municipal Office of Fireworks said that a stockpile of half a million boxes of fireworks -- some of them miniature versions of the ones used during the opening of the 2008 Olympic Games -- was available for the 15-day period between the Lunar New Year and the Lantern Festival on Feb. 9. The value of the fireworks that will go up in smoke over that time has been estimated at more than $15-million.

In many ways, it's an astonishing decision by a government that otherwise exerts so much control over people's lives. Want to buy a copy of Ma Jian's latest book Beijing Coma or surf the website of Amnesty International? The government has banned the former from Chinese bookstores and blocks access to the latter.

Want to whistle a firework a few metres above your neighbour's head in the middle of the afternoon? Go ahead. There's no better way to say happy New Year. I even saw policemen surreptitiously set off a few rounds when they thought no one was watching them. According to the Xinhua news agency, 46 people were injured on the first night of the celebrations. The latter number, though, was portrayed as good news since it was barely half the number who were hurt during the celebrations 12 months ago to welcome the first day of the Year of the Rat.

So what is a recently arrived Canadian -- brought up to think that fireworks displays are something that only the National Capital Commission can properly handle -- to do amid all this unhinged revelry? How does one respond after nearly being burned to a crisp in a coffee shop?

The only thing I could think of to do was join in. Later that same night, we headed down to the public square that stretches between Beijing's historic Drum and Bell towers with a plastic bag full of explosives that you'd need a license to buy in Ontario. With hundreds of other revelers, we welcomed the Ox in the noisiest, most reckless way we could.

Amiable dispatch and this enter helped me alot in my college assignement. Say thank you you as your information.

Good dispatch and this mail helped me alot in my college assignement. Gratefulness you for your information.