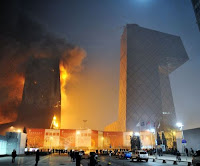 Beijing, Feb. 11, 2009: It was, quite literally, an unmissable event. A giant inferno that engulfed a 30-storey building in east Beijing, drawing a crowd of hundreds of onlookers.

Even those Beijingers who didn't see the fire itself on Monday night were affected by it the next morning as the firefighting operation shut down a major highway – the capital's Third Ring Road – for much of the day, causing traffic chaos throughout the city. The fire also contributed to Tuesday being one of the worst air-quality days in Beijing in recent months.

The blaze destroyed the nearly finished Mandarin Oriental hotel, which had been due to open this spring but is now an empty blackened tower. One firefighter died from smoke inhalation and seven others are in intensive care.

Making the fire even more obvious was its location, inside the complex that contains the iconic new headquarters of Central China Television, or CCTV. Dubbed the dakucha (the big underpants), by locals, the futuristic CCTV headquarters is one of the most striking new buildings on the Beijing skyline. In fact, CCTV owned the adjacent Mandarin Oriental building that was destroyed in the fire, and hosted the fireworks party that was found responsible for starting the blaze.

And yet, the news staff at the state-run CCTV were apparently the only people in Beijing who didn't notice the tower of flames directly in front of them. That night's newscast began not with live footage of the fire inside their complex, but with news of the fatal bush fires in faraway Australia.

As Han Han, one of China's best-read bloggers, sarcastically noted: “If CCTV's premium evening news program started airing at that time, the cameramen could move their lens toward the window after news anchors introduced what was happening with the fire — they would get the images of the fire and produce the first unedited news story in CCTV's history.”

In comments that were themselves censored before being reposted by other Chinese bloggers as well as websites outside China, Han Han compared the Mandarin Oriental to “the thing underneath the big underpants” and said that by burning it, CCTV had committed a symbolic act.

“Such self-castration just perfectly fits the image of CCTV being the world's number one eunuch media,” he wrote. “For sure, the present CCTV does not deserve to have one.”

Han Han is not alone in his disdain. Last month, a group of 22 prominent Chinese intellectuals called for a boycott of CCTV, saying the network churned out only “low-grade propaganda.”

(For a taste of why many Chinese people might be fed up with CCTV, check out this YouTube clip of how the network covered Barrack Obama's inaugural address. The live feed is muted and the presenter awkwardly cuts in just as Obama mentions that “earlier generations faced down fascism and communism not just with missiles and tanks, but with sturdy alliances and enduring convictions.”)

CCTV eventually acknowledged that it was responsible for the fire, and that it didn't have the required permit to use fireworks that the deputy chief of Beijing's fire control bureau said were identical to those used during the opening ceremonies of last summer's Olympic Games.

It has yet to apologize for its shoddy coverage of an event that couldn't have been any easier to report.
Posted by markmac at 1:37 p.m.