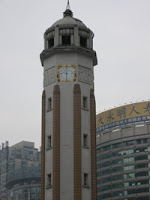 Chongqing, Feb. 19, 2009: This heaving city in southwestern China is a place of many contrasts. It is at once a city that is almost unheard of outside eastern Asia, and by some measures the world's largest metropolis (if you include the admittedly expansive municipal area, some 80,000 square kilometres, a staggering 32 million people live here). And while it's hardly news anymore that modern China is a place of massive disparity between rich and poor, those two worlds don't often rub shoulders in Beijing, which six months after the spectacle of the Summer Olympics still has on its best clothes for the outside world. The poverty that afflicts so many of this country's 1.3 billion people is hidden away nicely from the hordes of foreigners that troop through the capital city.

In Chongqing, meanwhile, gleaming towers crammed full of high-end stores and restaurants stand directly beside squalid apartment blocks and long-uncollected garbage. Young professionals in stylish Western clothes share the sidewalks with husky bang-bang men who carry other people's goods up the steep slopes of this mountainous port city on bamboo poles slung over their shoulders.

Chongqing was also the city that served as the capital of China (and the headquarters of Korea's government-in-exile) during the brutal Japanese occupation of Beijing and the Pacific coast during the Second World War. It was here that Mao Zedong and Chiang Kai-Shek met after Japans surrender to the Allies for 42 days of peace talks that quickly dissolved back into civil war between Mao's Communists and Chiang's Kuomintang.

In the centre of this chaotic city stands the eight-sided Peoples Liberation Monument. Originally made of wood, it was first erected to commemorate the death of Sun Yatsen, the leader of the 1911 revolt that brought down the Qing Dynasty. In 1947, it was rededicated by the Kuomintang government to mark the victory over Japan. Three years later the new Communist regime gave the tower its current name in celebration of the first anniversary of the People's Republic of China.

In other words, 27.5-metre high tower — now a concrete pillar decorated with gold writing — has a habit of getting a new name and a makeover each time there's a change of power in China.

Some revolutions are quieter than others, however. A few years ago - the locals I spoke to said they couldn't recall precisely when - four ornate gold clocks were added to the top of the People's Liberation Monument, each bearing a very prominent "Rolex" label. More than one visitor has dubbed the remodelled monument the Rolex Tower. It still stands on Chongqing's central square, surrounded by a Starbucks, a McDonalds and a KFC.

As one blogger from the Muslim region of Xinjiang noted after their own visit to the People's Liberation Monument "they're SO BAD at communism in China."

Not a shot was fired, but the only thing China's latest revolution lacks is a name.
Posted by markmac at 1:46 p.m.