The bum's rush out of Kashgar 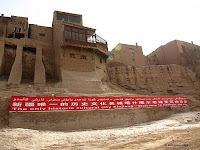 Kashgar, China - I was in deep sleep when I heard someone ringing the doorbell of my room at the Tian Yuan Hotel. I looked at the clock, saw it was only 8 a.m. and rolled over to go back to sleep. Whoever it was could come back later. There was a “do not disturb” sign hanging in the door.

The bell rang again, then a third time. If it was housekeeping, they obviously thought some sort of emergency cleaning needed to be done.

Groggily, I put my glasses on and opened the door a crack. A short man in a red shirt peered back earnestly. He told me he was from the local government, and that I had to leave the city on an 11 a.m. flight. There were four other men in the hall, two of them in blue police uniforms.

“I'm sorry, but the security situation is not good,” the man in red told me. “You must leave the city for your own safety.”

I told him that I had a flight back to Urumqi the following morning. (I had been in the city for less than 24 hours, reporting on the local government's plan to demolish most of Kashgar's historic Old City.) The man in red seemed to know this already.

“No, you must leave today,” he said firmly, shaking his head.

Arrangements had been made for me to be on the 11 a.m. flight out.

After awkwardly gobbling down my breakfast under the supervision of two police officers, I was taken to the lobby where Elizabeth Dalziel, a photographer with the Associated Press, was already waiting with her own security entourage. Together we were driven to the airport and instructed to book flights back to Urumqi.

That's when it descended into farce. Elizabeth and I sat down and waited for the security men who were escorting us to buy us tickets and put us on a plane. That's how it goes in the movies after all.

But the security guys did nothing for the sort. They stood at the other end of the ticket counter from us, expectantly us to buy our own way back to the provincial capital, Urumqi. (Why they thought we'd be “safer” in Urumqi – where 156 people died in riots this week – than Kashgar was never explained. The best answer I got was from the man in red, who said that while Kashgar appeared safe, that “it could change at any second.”) The 11 a.m. flight took off without us, and the standoff dragged on.

The police instructed Elizabeth and I to buy tickets for the next flight out, just after 2 p.m. We called the Department of Foreign Affairs in Beijing, as well as the government media office in Urumqi, looking for clarification of our situation.

Were we under arrest? If not, could we return to the city? Why hadn't we been put on a plane, as the man in red said we would be?

Revealingly, the answers were different depending on which government department we called. Officials in Beijing had no idea we had been detained or why. The propaganda officials in Urumqi – who had made a show of being accommodating to the media this week, a clean break from a year ago when foreign journalists were completely barred from Tibet in the wake of riots there – told us that the officers in Kashgar had made a mistake and that we were free to go.

We passed that on to the officers guarding us, who retorted that they had been ordered to take us to the airport, and that those orders hadn't changed. An official from the local government promised to come out and mediate the situation, but never showed up.

“It's not possible to arrange interviews today,” she said. “You should leave.”

Even if we wanted to, we couldn't have. After the 11 a.m. flight, commercial air traffic in and out of Kashgar was stopped, apparently so that a succession of military planes could land and offload more troops.

Though Xinjiang is Chinese soil, both Urumqi and Kashgar have the feel of occupied cities this week.

Elizabeth got frustrated and – noticing that our guards had long since stopped paying attention us – made a daring run into the city to photograph afternoon prayers at one of the city's many mosques.

She was eventually found by police and brought back to the airport. Our fates were sealed, so rather than spend the night in Kashgar Airport, we gave up and bought tickets to the next flight out to Urumqi.

What happened in Kashgar today that they didn't want the foreign media to see?

To the best of my knowledge, nothing major. But with foreign journalists kicked out of the city, the Internet switched off and international calls blocked, we may never know for sure.
Posted by markmac at 2:43 p.m.