Through the looking glass: peeking at North Korea from across the Yalu 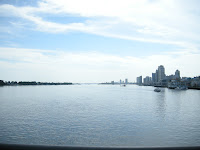 Dandong, China - Monday, Aug. 24: Photographer Sean Gallagher and I landed today in the northeastern Chinese city of Dandong after a 90-minute flight on Air China from Beijing. We were met at the airport and taken straight to a hotel called the Pearl Island Golf Club.

There's a driving range here, but no golf course that we can find. Our room does offer a nice view across the Yalu River into North Korea, though.

It's our first glimpse into the Hermit Kingdom: a row of grey two- and three-storey buildings that appear to be uninhabited. Further east, there's a Ferris wheel that doesn't turn and an industrial zone where a single smokestack pumps black smoke into the air. The other factories, whatever they make or made, appear closed.

The contrast with the Chinese side is unmistakable. This side of the river is a construction site, with multi-storey apartment blocks and office buildings rising before your eyes. The locals stroll along a paved boardwalk and sit on the banks to stare at the Hermit Kingdom across the Yalu.

The North Korean side is deathly quiet in contrast. Even using the zoom lenses on our cameras, we only see a handful of residents, most of them walking or cycling. Not a single car drives by in the time we watch the other bank, though there is the occasional truck.

After an hour on our own, our tourist agent picks us up and takes us to the waterfront. Our first stop is the Broken Bridge, a broken metal span that was cut in half by a U.S. B-29 during the Korean War.

But that history is not what draws people here any more. Like the rest of the tourists, Sean and I walk right past the photographs explaining what happened here in 1953. It's at the end that we get our cameras out and resume photographing the south bank of the Yalu. The B-29's intent may have been to cut off a vital supply route for the North Korean army that was then pushing UN forces back south with the help of Chinese “volunteer” fighters, but 56 years later its lasting impact has been to create a tourist stop that allows voyeurs to get a few hundred metres closer to North Korea without the need for a visa.

“I feel a bit dirty,” Sean confesses in his London accent after we finish the 20 yuan (about $3.50) tour. It does indeed feel wrong to stare and point at the people across the river as though they are zoo animals.

But peering into Stalinism's last redoubt is a lucrative industry here in Dandong. After our walk to the end of the Broken Bridge, we board a tour boat crammed with more than 70 Chinese tourists. The boat crosses the middle of the river – presumably into North Korea waters – as cameras snap away and tourists pose against a backdrop of patrolling soldiers and bare-chested men wading waist-deep into the water to fish with nets. Another packed boat leaves every 30 minutes.

Our boat captain has chosen The Carpenters as the soundtrack for the 30-minute excursion. Every sha-la-la-la. Every whoah-oh-oh. At first it seems wildly inappropriate, but later it occurs to me that Yesterday Once More (the song's title) might be exactly how many Chinese feel as they peer at a country still living through the disastrous leadership China itself experienced decades ago during the Cultural Revolution and Great Leap Forward.

Dinner that night is an alcohol-soaked affair at a North Korean restaurant in Dandong. Beef, rice, kimchi and a fruit alcohol that our guide mixes into our Taedonggang beers.

The patrons are in a great mood, singing and clapping along with a lively stage show. It's just a guess, but it feels like they're delighted to be among the very few allowed to leave the paranoid and impoverished place across the river.
Posted by markmac at 11:15 a.m.