Passport games - trying to stay out of Pyongyang Prison 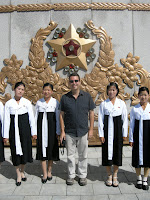 Pyongyang, Thursday, Aug. 27: For several days now, I have been inside North Korea with a secret. Jammed deep in my pocket, under my wallet, was a passport containing stamps that identified me as a Canadian journalist living in China.

It was not the passport I'd presented at the border. When we crossed from China, I had handed over an older document that was still valid but had nothing in it hinting at my profession. One of the North Koreans assigned to mind and monitor us had kept that document, saying it would be returned to me when I was leaving the country.

It was the second passport that occasionally made it difficult to sleep at night. Two U.S. television journalists, Laura Ling and Euna Lee, were arrested earlier in the year for illegally crossing North Korea's border with China. They had been sentenced to 12 years hard labour, and served nearly five months before Bill Clinton flew to Pyongyang to rescue them.

I found myself wondering if Jean Chrétien would do the same for me.

Keeping the incriminating document in my pocket worked until this sunny morning, when our tour guides informed us that we would visit the mausoleum of Kim Il-sung to bow before the waxy remains of the “Great Leader” who is still so revered here.

As we pulled up in the parking lot, our guide turned around in her seat and struck fear into my heart with one politely uttered phrase. “You will have to empty your pockets in front of the security guards before you enter the mausoleum.”

Terror. My run of luck – I had gotten in and out of such journalist-unfriendly places as Zimbabwe, Syria, Belarus and Iraq in recent years without serious incident – was over. If I hid my passport on our government-provided minibus, there was no guarantee it wouldn't be uncovered while I was touring the mausoleum. Putting it in my backpack and handing it over at the coat check seemed equally foolhardy.

I had no other options that I could think of, so I did the only thing that came to mind. I let our minders exit the tour bus ahead of me, and waited until I was the last person on the bus. Then I took my passport out of my pocket and jammed it down the back of my pants.

Pleased with myself, I took a few confident steps towards the security guards who were supposed to frisk me. Almost immediately I had the unfamiliar and disconcerting sensation of a small blue booklet sliding slowly over my backside. It picked up speed as it headed south down my right leg.

Looking and feeling desperate for a bathroom break, I asked where the nearest toilet was and broke into a stiff-legged run as soon as I was pointed in the right direction. I got inside (it was mercifully empty) and slammed the door just in time to grab the passport as it landed on the top of my shoe.

I still hadn't gone through the pocket-emptying security check, so I had no choice but to try it again. This time, the passport went down the front of my pants. If the guards check there, I decided, we have problems no matter what they find.

Though I was drenched in sweat by this point, the trick worked and the guards spent only a few seconds at my wallet and the lint I retrieved from my pocket. I joined the long line of tourists and North Koreans who had come to pay their respects to the corpse of a megalomaniac dictator who died 15 years ago.

Some wept openly, apparently in sadness, at the sight of the man who instigated the pointless Korean War and oversaw one of the cruellest police states in modern history. Others stared at him expressionlessly.

Maybe it was the uncomfortable placement of my passport, but I found myself wanting to laugh at the absurdity of it all.
Posted by markmac at 11:37 a.m.

Quite a story...I suppose that one has to empty the pockets so as to prove no pens or knives or something could be used to damage the sarcophagus, or sneak out a photo of the wax corpse? Uneasy. Makes security on the Chinese side of the border lax by comparison.