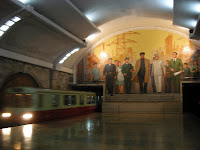 Beijing, Saturday, Aug. 29: Living and working in China can sometimes be difficult, especially for a foreign journalist. The ever-growing restrictions on the Internet and freedom of speech can be truly depressing for those of us who make a living saying what we think and trying to coax others to do the same.

Sometimes it feels like the government in Beijing can behave abysmally and get away with it simply because it is far too economically powerful and important to be challenged any more.

But a week in North Korea (you can see all the writing, photos and video Sean Gallagher and I produced from our trip here on The Globe and Mail website.) has given me some important perspective on where China is, and how far it has come in the 30 years since Deng Xiaoping renounced Mao's excesses and implemented his policies of reform and opening.

North Korea hasn't had its Deng Xiaoping or Mikhail Gorbachev yet. It's still trapped in an era many Chinese would recognize from the bad old days. The paranoia that ruled during the Cultural Revolution – the fear that you could be denounced, arrested or worse for the smallest indiscretion – is still thick on the streets of Pyongyang. Catastrophic economic decisions that recall Mao's Great Leap Forward still wreak havoc on North Korea's industry and agriculture.

Halfway through our week in North Korea, Sean and I confided half-jokingly to each other that we were starting to miss the relative freedom of China. By today, we were lusting for Beijing's smoggy air like a long-remembered lover.

Following one last scare at Pyongyang Airport that involved a border guard suspicious of my passport, we boarded our Air Koryo flight home after one of the most interesting and intense weeks either of us had ever experienced. As our Russian-made Ilyushin-62 lifted off, Sean and I looked at each other, smiled and exhaled deeply. When it touched down at Beijing Capital Airport at just after 10 a.m., we started laughing out loud.

Safely back on Chinese soil, we could talk freely for the first time in days. While in Pyongyang, we had been guarded in what we said even inside our shared hotel room, assuming it was listened to (a suspicion that was bolstered every time we opened our door and spotted a Workers' Party cadre lingering in the hall outside with seemingly very little to do).

In the presence of our minders, who stayed with us from dusk until dawn, we stuck to our cover stories. He was an English teacher, obsessed with correcting my Canadian pronunciation. I was the author of a book on recent Russian history (true enough), and fascinated by the Soviet-era friendship between Moscow and Pyongyang.

Repeating our lines was nearly as dull as it was difficult. Maybe it gave us some small insight into how careful North Koreans have to be in what they say every day of their lives.

For all modern China's flaws – and there are many – it is now a place where ordinary people, at least in Beijing and other big cities, can act and dress how they want. No one has to wear a Mao pin or join the Communist Party if they don't want to.

My earlier caveats aside (and they remain important), Chinese can also largely think and say what they want, provided they don't get too deeply into politics, or try and post those thoughts on the Internet.

Many Chinese are affluent now, and many more are no longer poor. Most of them are free to decide which way is the best for them to make money and feed their family. Those who have cash spend it how they choose, often travelling the world as they do so.

All of this progress gets too often forgotten by Western journalists such as myself who see a country in mid-journey and judge it by the distance it still has to go, rather than how far it has travelled.

Several large Chinese tour groups were in North Korea at the same time that Sean and I were there. Though our North Korean minders limited our interaction with them, I suspect the younger Chinese wanted to see what it looks like to live in a fanatically ideological country that has cut itself off from the world. The older ones came perhaps to remember what it was like to live in just such a place.

They can do that now. For them, it's the past, no matter how painful.

Sadly, for North Koreans it remains the here and now.
Posted by markmac at 11:53 a.m.

why don't you just visit China as a tourist? (I've just learned that you know Mandarin from your latests comment on the Globe)

Wouldn't that be a lot easier?

oh and out of curiosity, what was your major while you were at Carleton?

My problem was that my Chinese visa was in a passport that I couldn't show to the North Korean authorities.

They (understandably) couldn't fathom how I had come from China - and was planning to return to China - without having any Chinese stamps in the passport I presented to them.

And I studied journalism at Carleton. BJ 97.