The pool hustlers of Pyongyang 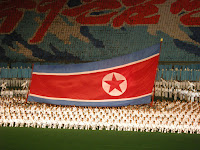 Pyongyang, Friday, Aug. 28: Finally, on the last day of our tour, Sean and I were given a few hours in the evening to unwind, a rare and badly needed break from a carefully packed itinerary that required us to be up and eating breakfast by 7 a.m. every day and that kept us busy until at least 9 p.m.

Today we started with the 2.5-hour drive south to the Demilitarized Zone (between North and South Korea), then returned to Pyongyang in time to tour the city's Soviet-style metro system. Fascinating, but exhausting.

Throughout the week here, our days have seemed designed to be so busy as to keep us from having any unscripted moments where we might meet and interact with real live North Koreans. At one point I suggested that we skip some of the formal sights and spend an afternoon in a park. Our guides just laughed, the same as they did when I inquired what Pyongyang nightlife was like.

So we were grateful to discover that the 47-floor Yanggakdo Hotel that we were confined to at night came equipped with bowling alleys, a casino and a billiards room in the basement. (The photo, in case you're wondering, is completely unrelated. It's from the Arirang Mass Games that we saw the previous night.)

Sean and I settled on pool as our leisure of choice, and he quickly demonstrated that he had spent far more time in the pool halls of London, England than I had in Stittsville, Ontario. I always struggle in games where there's no ice involved.

After three rapid, easy wins, Sean set off in search of what the British call the loo, leaving me to practice bank shots on my own. It didn't amuse me for long.

I went up to the empty bar and asked the long-haired young woman behind the counter for two more Taedonggang beers. She handed the drinks over, then smiled sweetly.

I was momentarily confused about what she was suggesting, but followed her gaze to the ready pool table behind me.

“A little,” she replied, still smiling.

It proved to be quite an understatement. She gracefully potted a ball off the break and then proceeded to sink six more in a row without missing. Each time she made a particularly improbable shot, she would give me an apologetic look and say “sorry.”

In the corner, the nightly news played on a muted television. Looking over, I could see Kim Jong-il had visited some establishment and given advice to those working there, just as he seemed to every day. And yet, no one ever seems to have seen the Dear Leader in person.

Finally, it was my turn to shoot. Dazed, I knocked a ball uselessly down the table, missing the corner pocket by several inches. “Ooh, unlucky,” my tormentor said, covering her mouth to stifle a giggle prompted by my ineptitude. She swiftly put me out of my misery by dunking the eight-ball.

By this time, Sean had returned, and another waitress had emerged. She suggested that we play in teams – North Korea versus the United Nations, 1950s style.

I'm slightly embarrassed to report that despite Sean's best efforts, the North Koreans – dressed in matching blue uniforms that made them look like air hostesses from the 1970s – ran the Western imperialists out of the room, winning four of five games.

Though they spoke little English, my missed shots and bumbling attempts at speaking Korean gave everyone something to laugh about. Until a Workers' Party cadre wandered in and saw four people having fun that hadn't been government sanctioned.

He barked at the two women and ordered them back to work.

On the television set, images of life in this socialist paradise flickered silently.
Posted by markmac at 11:49 a.m.

Mark, I just stumbled on your blog. Looking forward to hearing more about your experiences in NK. Like the young Chinese tourists, I'm very curious to see that unique country.

Are you by any chance the same Mark MacKinnon who created BESM? I would ask "off the record" but I couldn't find an email link.

Thanks Bruce - and for the record, no I am not related to my googleganger, the Mark C. MacKinnon of Big Eyes, Small Mouth fame...