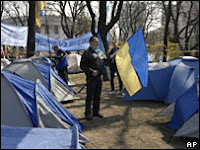 It looked like it for a while this morning anyway. A few thousand people, waving the blue flags of Prime Minister Viktor Yanukovich's Party of Regions, plus a few thousand more waving red Communist and Socialist banners, showed up on Kiev's Independence Square - the very site of the Orange Revolution in 2004. They're protesting President Viktor Yushchenko's controversial decision to dissolve parliament and call fresh elections in the face of alleged efforts by Yanukovich to bribe opposition lawmakers to join his coalition. They're pitching tents and promising to stay indefinitely.

For a while it looked like something remarkable was happening, but so far it's a lifeless demo. Try asking people why they're there, and the answers lack conviction. Maybe that's because they really don't believe in the cause they're protesting for. One woman told me she was there because she'd been paid 50 hrivnya (about $10 US) to stand on the square and wave a blue flag.

But the news services are reporting that thousands more Yanukovich supporters are headed for the capital from his power base in the Russified east of the country. Meanwhile, the pro-Western Yushchenko and his fiery ally Yulia Tymoshenko are said to be planning protests of their own. Could it be 2004 all over again?

Interested to hear an the update if there is one from the Constitutional Court. Seems Yanukovitch is playing for keeps, sacking Davydovich and putting the 2004 fraudster back in charge of the Central elections Commission.

Hi. Nothing yet from the Constituional Court. No surprise there, they've been deadlocked and unable to make a decision for months.

I don't think the court is where this gets solved.

Does it look like Yushchenko will finally say "No more Mr. Nice Guy"?

Or is it too late for him?

Great blog, btw! Thanks so much for putting it up...

I think Yushchenko will have a hard time backing down. I met this afternoon with some people close to his camp who say he's really intent on forcing an election here.

Expect Yanukovich's people to fight hard to find a way to block such a vote - despite the Party of Regions' lead in the polls, they're not ready for an election right now. Yushchenko seems to have caught them by surprise with this move.

The "blue" street protests are growing in size, btw, if not in emotion.

Dear mark. Yes, I've heard they're paid. In fact, most flag wavers in Maidan on the random days are usually paid. I think that's why they pack up and go home at night, rather than camping in tents. 50 gryvnia isn't enough to sleep out. But the protests outside city hall in November against the increase in rent was quite passionate, I thought they were all legit...

Not only are they paid, I witnessed a little bit of a drunken scuffle between two of those paid flag wavers yesterday.

A friend of mine who was making his way from the Trade Unions building to the Post Office on the other side of Maidan noted that these people had no communication skills what so ever. Clearly for them the 150 UAH to go to Kyiv and the 50 UAH a day they are getting is better than being owed money by the Yanukovych Government.

Yanukovych is clearly also lacking communication skills, reports I have seen on TV where he attempts to say something lucid are pointing to one thing. An hood will always be a hood, and when the pressure is on the revert to their old ways.

Now it comes down to who will play their cards right and who will hold their ground.

Mark
You have an instinct for being in the right place at the right time. Congratulations on your sense of timing and on your book publication. Looking forward to reading it.
Great blog. May join you in Kyiv on election day.
Bohdan Warchomij
Australia

Bohdan - great to hear from you too... I see you also have a book out on the Orange Revolution. Congrats - how do I get my hands on a copy?

brrr, yes, I was thinking the colors were predominantly blue and red on the square.

hi Mark send me a postal address to my website and I will forward you a complementary copy of "Portrait of a Revolution".
Best wishes
Bohdan Warchomij
www.warchomij.com