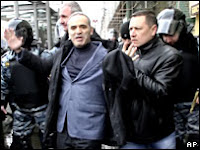 BBC is reporting that opposition leader Garry Kasparov was arrested today at an anti-Putin rally in Moscow.

I wish I could say I'm surprised, but this is the way Russia is heading now. Where dissent was tolerated, if sidelined, in the early Putin years, paranoia has now completely taken over. You can once more get arrested simply for expressing your political opinions - just like the bad old days.

Nine thousand riot police to deal with a march that organizers had said would draw a maximum of 5,000 people?

I remember chatting a few years back with independent MP Vladimir Ryzhkov. He told me then that Russia was on the road to "Belarusification," in other words becoming more and more like Alexander Lukashenko's neo-Soviet hermit state next door.

Today, it looks like that journey is complete.
Posted by markmac at 5:55 p.m.

Mark, when Kasparov was arrested a number of friends and I were discussing this. Many of us had done work with NGOs from Belarus, and some of with similar groups from the Russian Federation, and our sentiments were that the RF has become a state much closer to Lukashenko land.

Vladimir Ryzhkov's comments to you a number of years ago could not have been more fitting.

Next time you are in Kyiv, give me a shout.