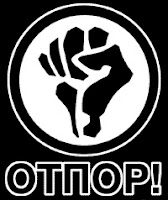 During this weekend's opposition rally in Moscow, it was impossible to miss the clenched-fist flag that some protestors were waving.

The Russian youth group Oborona has arrived, based on Otpor, the Serbian student movement that led the successful push to topple Slobodan Milosevic in 2000 (that's their symbol at left - Oborona's is identical). Oboron is the Russian word for "defense."

Crucially, all three groups received financial and other aid from the U.S. government's National Endowment for Democracy and George Soros's various non-governmental organizations. These are the battlegrounds that "the new cold war" (plug, plug) is fought on.

The fact that the clenched-fist flag is now regularly seen in central Moscow is the clearest sign yet that the opposition is gearing up to follow the Serbian-Georgian-Ukrainian model (falsified elections, followed by mass protests) around the coming Duma and presidential elections.

The Kremlin, which got its nose badly scraped in Ukraine, knows that too, which partly explains the harsh response this weekend.
Posted by markmac at 4:45 p.m.

Yes, the Russian democrats or what have you, should follow Serbia's, Georgia's and Ukraine's examples of regime downfall along of course with the all the ensuing consequences..

I am not sure if I should post it here, but is your book also available in Europe? I would love to get a copy so I can review it in my blog.

hi kasi - the book (which was released today!) is available on amazon.com and chapters.ca.

as for european release, there's no set date yet, but the buzz is picking up and i hope it will be on bookshelves there by the end of the year. i'll confirm the whens and the wheres soon, i hope.

(until then, e-mail me at mark.mackinnon.2007@gmail.com and i'll look into whether i can get you an advance copy...)

Contrats on your book issuance! I'm still eagerly waiting for you to provide me with an excerpt for LR and PP.

Meanwhile, in case you are interested, here's the link for Oborona (I believe you've left off the last A from their name):

As it happens, I've just published a translation from one of their web pages, here:

Their flag has been flying over my blog for some time now, though I have no affiliation with them (other than admiration).

Do you have any links detailing the financial support you say they are receiving from USNED and/or Soros?