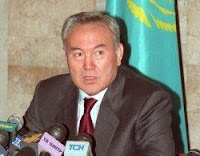 Wow. The parliament of Kazakhstan has just lifted the limit on the number of terms in office that President Nursultan Nazarbayev can serve. Given that the 66-year-old autocrat wasn't scheduled to face re-election until 2012, the unexpected move is effectively permission from parliament for Nazarbayev to remain in office for the rest of his life.

It's sad how quickly the dream of democracy in Central Asia died. After the "Tulip Revolution" in neighbouring Kyrgyzstan in early 2005, there was hope that the old elites who had ruled the region since it was part of the Soviet Union could all be swept aside by a tide of change. Nazarbayev himself was in full panic, terrified that his regime would be the next to face a popular uprising.

The Kazakh opposition kicked into high gear, preparing for street protests in Almaty and other Kazakh cities and pleading for Western help in ensuring the December 2005 presidential elections would be free and fair. The West never responded, and Nazarbayev was allowed to remain in office, claiming improbably to have won 91 per cent of the vote.

This is where I get cynical about Western "democracy promotion" efforts. The West - specifically U.S. organizations like the National Endownment for Democracy - which had played such a big role in helping bring about change in Ukraine and Georgia in the previous two years, basically ignored the Kazakh opposition's cry for help in 2005. Why? Oil and Islamophobia.

Nazarbayev's regime was allowed to survive because it allows American and British oil firms to basically do what they like in the country. Oil companies like stability, and they effectively told the Western governments that they were happy to deal with the corrupt devil they knew, rather than someone who might sweep in and examine the deeply tainted privatization process under which they came to control so much of Kazakhstan's natural resources. (A process under which Nazarbayev and his family are believed to have pocketed billions.)

Equally, by late 2005 there was significant cooling in the White House's desire to see democractic change in Muslim world. After watching Islamists gain power or a share of power through the ballot box in Iraq, Iran, Lebanon and elsewhere, the U.S. was newly receptive to Nazarbayev's message that his repressive methods, while unsavoury, were keeping Islamists from seizing power along the key Central Asia-Caspian Sea-Caucasus energy corridor. The same factors, it's worth noting here, are behind the West's reluctance to put too much pressure on Azerbaijan's Ilham Aliev.

Never was the message clearer than on Dick Cheney's trip to the region last year. After stopping in Lithuania to give a speech slamming Kremlin "intimidation and blackmail" and decrying the lack of democracy in Russia, Cheney flew on to Kazakhstan to embrace Nazarbayev and sign more oil and gas contracts.

The silence so far from the White House on the Kazakh parliament's announcement is deafening. Vladimir Putin and Alexander Lukashenko are surely taking notes.

Nazarbayev for life. I’m in shock. A new Turkmenbashi :) I always used to say that the most democratic country in the whole CIS is Kyrgyzstan. The rest have a sort of medieval monarchy.

Bastards! They decided the fate of the whole country in just 17 minutes!

There's a great discussion on the topic at neweurasia.net.

(And yes, I'm aware that neweurasia is part of the same democracy promotion regime that I just slammed. I'm not saying they don't do good work, only that the U.S. withheld crucial support in Dec. 2005 that it had been willing to offer the Ukrainians and the Georgians. Anyone who disagrees should ask the Kazakh opposition how they feel about Condoleeza Rice.)
Posted by markmac at 8:54 p.m.

I'm a little bit disappointed by this post,since although you are making a valid point you've ignored three other equally valid and important ones.

It's quite true that the West should be ashamed of its failure to promote democracy in Kazakhstan, and in many other places around the world. I spend a lot of time writing for Publius Pundit about this very topic.

But you've said nothing about Russian actions to directly undermine democracy in places like Kazakhstan -- indeed, not merely to undermine but to replace home rule with Russian domination -- especiall through the use of weaponized energy. Where's your "cynicism" about that?

And where's your criticism of the people of Kazakstan, and the people of Russia? Reading your post, one might think that governmental forces in the United States control the fate of these people, and that's a huge pile of B.S. The Russian people have actively endorsed the Kremlin's imperialism by favoring it with overwhelming supporing and allowing opposition groups to evaporate, and the people of Kazakhstan have not been active in promoting democracy either.

Most disappointingly, you've failed to attack the Western media establishment, of which you are a part, and yourself. Maybe you feel you personally have done all you could to write about these issues, but have your employers? You know they haven't. Yet, you remain as silent in the face of this outrage as the people you criticize.

Russophobe - you make some good points.

Yes, it's important (perhaps, I would argue, in another day in another post - this one was about the opportunity lost in 2005, not the history of post-independence Kazakhstan) to point out that the Russian government has supported the restoration/continuation of despotism in Central Asia since 1991 and especially since 2000.

And yes, the Western media, of which I am part, doesn't devote nearly enough time to examining a region as critical as Central Asia. But those are other posts, for another time.