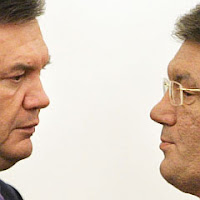 The crisis in Ukraine continues to rapidly worsen. First we had the President dissolving parliament, parliament ignoring the order and the Constitutional Court hemming and hawing over what to make of the whole mess. Then we had duelling street demonstrations, with orange and blue flags reappearing on the streets of Kyiv, 2004-style. Then we had Viktor Yushchenko, the pro-Western president, and Viktor Yanukovich, the Moscow-backed prime minister, agreeing that the way out of the crisis was to hold fresh elections, but unable to set a date for said vote to happen.

Does Ukraine have a parliament? It's unclear. Will there be elections? Probably, but no one knows when.

In the past few days, the crisis has slid from the farcical to the highly dangerous. On Thursday, Interior Minister Vasily Tsushko, a Yanukovich ally, sent troops to Piskun's office - not to evict him, but to protect him. Yushchenko responded by putting the Interior Ministry's 40,000 troops under his command - a move that Yanukovich says is unconstitutional and shold be ignored.

Yushchenko has for months been warning that Yanukovich and his allies have been preparing a "creeping coup." Until now, it was assumed that he was referring to allegations that Yanukovich and his allies had bribed MPs from pro-Western factions into crossing the floor, putting the pro-Russian bloc on the verge of the two-thirds majority in the Verkhovna Rada needed to change the constitution.

Yushchenko's latest moves suggest that as the crisis deepens, he's also worrying about the possibility of a coup in the more conventional, military sense.
Posted by markmac at 5:07 p.m.

Indeed they did. Crisis postponed (somewhat) for four months.

Mark,
Translate this for your readers:
http://www.1tv.ru/owa/win/ort6_main.print_version_frame?p_news_title_id=103349

They are becoming the enhancement option of choice for many men for several reasons. vimax pills is the best penis enlargement pills on the market today.
http://www.male-sexual.com/vimax-pills.html - http://www.youtube.com/watch?v=pobXsnw7CWs