Ukraine heading to the polls 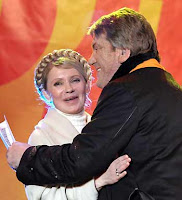 The standoff is over for now, and Viktor Yushchenko appears to have won the test of nerves against his arch-rival, Viktor Yanukovich. The two men announced today that they have agreed to hold new parliamentary elections in the near future, something Yushchenko has been demanding since dissolving parliament last month amid a bribery scandal.

So far, no date has been set, but Yushchenko said today that the vote would be held within 60 days. July 8 is the best guess of some people in the know.

Why did Yanukovich throw in his cards? Because his "Blue Revolution" on the streets of Kyiv was a failure. The demonstrations on Independence Square were lifeless affairs, and as word got out that most of the protestors were being paid to participate, the farce became more of an embarassment to Yanukovich than a tool for pressuring Yushchenko.

But the demos did serve a useful purpose for Yanukovich and his allies. When Yushchenko originally dissolved parliament on April 2, he set the fresh polls for May 27. At the time, people close to the Party of Regions told me that Yanukovich hadn't expected Yushchenko's move, and that the party was in no position to run an election.

Seeing the election date pushed back five or six weeks gives Yanukovich - whose party still maintains a strong lead in the polls over both Yushchenko's Our Ukraine movement and the Yulia Tymoshenko bloc - a chance to win the victory at the ballot box that he wasn't going to achieve in the streets.

How well the old Orange Revolution allies, Yushchenko and Tymoshenko, can cooperate over the campaign may determine whether Yanukovich and his Kremlin backers succeed.

Good update. From here it looked like Yushchenko was being the invertebrate president, but maybe he has more backbone than I thought.

Oooooh, great post! I am glad to have found your blog! I will be back! I am also interested in getting my hands on a copy of your book in the future! Looks good!

I wondered why it had gone quiet all of a sudden. Thanks for the update.