The struggle over history 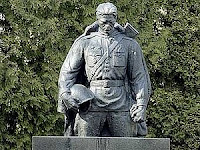 The struggle for modern Russia is, in many ways, a struggle for its collective memory. What was the USSR, and how should it be remembered?

In the West, the answer is easy: the Soviet Union was the "evil empire" - an aggressive dictatorship that terrorized its own people and those in neighbouring countries.

To many Russians, especially those who suffered through the country's chaotic experience with democracy and free-market economics in the 1990s, the answer is less clear-cut. Disillusioned with what "freedom" brought them, many Russians now openly pine for the stability, or stabilnost, of the past.

I interviewed pollster Yuri Levada shortly before he died about the wave of nostalgia for the "good old days" that had helped to sweep Vladimir Putin to power and make him one of the most popular leaders on the planet. The first sociologist to conduct polls of how Russians felt, his surveys showed that when the USSR collapsed in 1991, 50 per cent of citizens still admired the totalitarian system that existed before Mikhail Gorbachev and perestroika.

Levada, at the time, had assumed that the number would eventually decrease as Russians became accustomed to Western-style democracy and capitalism. But shortly before his death last year, that number stood at 65 per cent. The people, he told me in an interview for my book The New Cold War, had come to believe that stability and order were more important than democracy and freedom.

That verdict is playing an important role in the flaring Russian anger over the Bronze Soldier affair in neighbouring Estonia. While Estonians, rightfully, view the arrival of the Red Army in their country as the day the Nazi occupation ended and another began, many Russians (like many Japanese) have never come to accept or understand how their country's dark history is viewed in the rest of the world.

There was some poignant writing on this by Boris Makarenko in Kommersant over the weekend:

First, let's remember that Riga and Tallinn were not liberated by our troops so much as taken: far from all of the inhabitants of the Baltic countries liked the Germans, but few wanted to fall under the scepter of the Kremlin. Like Eastern Europe, the Baltic countries were deprived by us of their right to free elections, but Prague and Budapest at least got to be their own countries and have their own national flags and symbols; they were not settled by a massive wave of Russian speakers; and if someone there was repressed, at least they were sent to a jail near home instead of being exiled to Siberia. Should we really be surprised that there was more rage in the Baltic countries after the departure of Moscow, even if takes such uncivilized forms?

Second, it shouldn't be forgotten that, in the eyes of the majority of Central Europeans, the liberation from fascism and even the Cold War do not justify the fact that soldiers in a foreign uniform and under a foreign flag stood between them and Europe for half a century. We have been laboring too long under the impression that the Central Europeans liked being in the Warsaw Pact – despite the evidence of the events in Berlin in 1953, Budapest in 1956, and Prague in 1968.

Levada's numbers showed that lesson isn't being learned. More dangerously, history is rapidly being forgotten.
Posted by markmac at 5:23 p.m.

Communism is evil and the crimes of this regime should be faced and punished. However, only Nazis crimes were cendemned and this put a very good wepon for all leftist who adore Soviet uninion to say that communism is absolutely different from nazism, but in reality it is absolutaly the same.

I often read this canard that Russians have "come to believe that stability and order were more important than democracy and freedom." That's fine as far as it goes, but it's fundamentally dishonest because it doesn't tell the whole story.

During the time of Stalin, many Russians were prepared to sell out their own neighbors to the Gulag, to say nothing of people in foreign countries subjugated by Russia. Giving up your own freedom for "order" is one thing, and sacrificing the lives of innocent people on that alter is quite something else. An evil something else. There is no other word for it. Until Russians learn that fact, they will continue to spiral to their doom.