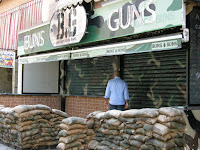 Tragically, the Guns and Buns restaurant in Beirut's Dahiyeh area was closed today when I went to go have lunch. I'd been thrilled by reports of a restaurant in the heart of the Hezbollah-controlled southern suburbs of the Lebanese capital that served such delicacies as a “Magnum Pistol” (grilled chicken sandwich) or the “M-16 Carbine” (lamb on a toasted bun) both of which can be served with a side of “Grenades” (otherwise known as potato wedges).

The signature weapon of the Hezbollah fighter, the “AK-47 Kalashnikov,” is apparently beefsteak sandwich served in long baguette-style bread. No wonder the restaurant's advertising slogan is “a sandwich can kill you.”

“When you live by the beach, people make cafes that reflect that beach atmosphere,” owner Yousef Ibrahim once explained to a reporter. “So when you live in a war zone, I think you should make the most of that too.”

The restaurant, which opened this summer, isn't directly affiliated with Hezbollah, but the Shiite militia controls everything that happens in the Dahiyeh and gave Guns and Buns its seal of approval by running a story about it on the movement's al-Manar television network.

Pity the restaurant doesn't open on Sundays. I was left to peer forlornly through the window from its sandbag-protected patio, denied my chance to sample such delicacies as the “Tactical Meal” and the “Terrorist Meal.”

No word on whether there are toys for the kids with those.
Posted by markmac at 7:08 p.m.