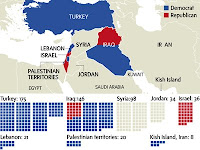 In Lebanon, as in Turkey, George W. Bush achieved the rare feat of unifying the country's quarrelling political factions around their disdain for him and his policies of the past eight years.

The militant Shia Hezbollah movement and its allies hate Bush for his open and unblinking support of Israel, particularly during the 2006 war during which the Israeli military laid waste to much of South Lebanon. When the war was over, Hezbollah supporters hung "Made in the USA" banners over destroyed apartment blocks and mocked claims by Secretary of State Condoleezza Rice that the war had been part of process to bring about a "new Middle East."

That Hassan Nasrallah's followers aren't fans of the Bush Administration is hardly surprising. Far more damning is the hurt disappointment of the country's pro-Western groups, who feel the U.S. abandoned them during and after the war, even though the White House had initially held up the 2005 Cedar Revolution here as proof that "freedom" was indeed spreading in the region.

Here's a sampling of what I heard during my journeys from Tripoli to Byblos to Beirut to Baalbek:

"Obama hates war. Bush wants war against the Muslims and the Arabs and I think McCain will be like Bush."

– Bilal Ramadan, 21-year-old science student. An Allawite Shiite, he lives in the northern city of Tripoli.

"I don't think Obama will be racist in his policies. Black people are not biased towards Israel."

– Wafa Darwish, a 40-year-old schoolteacher from the northern town of Qalmoun.

"Obama is better because he will sympathize with the Arab people and our causes. We hope that this is not just advertising."

"I am disappointed in both candidates. They are avoiding the big issue, which is the question of Palestine."

Out of nearly two dozen Lebanese that I asked about the U.S. elections, only two said they favoured John McCain. So Obama sweeps Lebanon and its 21 electors, widening his already impressive lead in the race:

Obama already clinched the Middle East Electoral College back when he won Turkey, but Jordan and Syria still haven't had their say. Results from both countries should be in by the time polls close in the United States on Tuesday, so stay tuned.
Posted by markmac at 7:13 p.m.