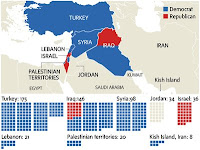 The polls have just open across the United States, but they're vote has long been decided in Syria, where Barrack Obama has unsurprisingly won another clear victory in our unscientific little survey of how Middle East voters feel.

Asking Syrians their opinion about politics is like walking around the Vatican asking who's gay. Most people just blush and walk away when you bring up the topic.

That said, a few Syrians did open up and share their opinions, usually when they were in situations where they could be certain that no one was listening. All who did talk frankly with me said they either supported Obama or none of the above. Not one wanted to see a McCain victory, for the same reason I've heard elsewhere in the Arab world — he's seen as more likely to continue the reviled policies of George W. Bush.

Here's a sampling of what I heard:

"I think Obama is better, but America's policy to Syria will not change no matter who is president."

— Rami, 35, bartender working at a resort in the coastal town of Lattakia.

— Marwan Kabalan, political scientist at the University of Damascus.

"We support whichever person will help us get back Golan"

— Georges Salim Attoun, gold seller in the old city of Damascus, referring to the strategic Golan Heights area that Israel has occupied since a 1967 war.

"You can see from their faces which one is better. Obama has a better smile, a better personality."

— Sarah, 23, waitress and model based in Damascus.

— nearly everyone else I asked.

So we colour Syria blue and award Obama 98 more seats in the electoral college, adding to his already wide margin of victory over McCain.

Jordan, which has 34 seats in our electoral college, will be the last to vote. Look for the final results here tomorrow, as well as perhaps a little analysis of what I've heard across this region about Bush, Obama and McCain since my journey began back on Oct. 8.
Posted by markmac at 7:39 p.m.