Hitchhiking to the "Capital of Terror" 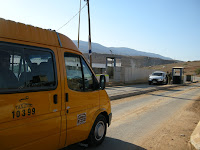 Finally, after prolonged negotiations – and several phone calls to the public relations staff of the Israeli military in Tel Aviv – I'm allowed to pass through Hamra checkpoint (pictured, with Israeli soldiers checking documents), along with my translator, Nuha Musleh.

(Apparently, Nuha was part of the problem. Although she identifies herself as Palestinian – and lives on the wrong side of the wall Israel is building in the West Bank – she holds East Jerusalem residency, which comes with an Israeli ID card. Israelis aren't allowed into Nablus, which is surrounded by imposing checkpoints built during the violence of the recent Palestinian uprising, or intifada.)

Our minibus has left us long ago, so we're left to stand on the side of the road, trying to thumb a ride the rest of the way to the city the Israeli military calls the West Bank's “Capital of Terror” in its press releases. During the intifada, the city is a stronghold of both Hamas and the al-Aqsa Martyrs' Brigades, and the Israeli army still conducts regular arrest raids here, including one earlier today.

After a few minutes of standing with our arms out, Ahmed and Khaireddin, two Palestinian farm labourers, pull over and offer to give us a lift to the next town, Toubas. Nuha and I climb into the back of their white Mercedes pick-up truck, and make room for ourselves amidst their water canisters and welding masks.
Ahmed and Khaireddin are coming back from a day working at a kibbutz inside Israel where they make 120 shekels (about $35) in a day. They don't care about the politics of that, as long as it puts food on their families' table.

“There's nothing in Palestine,” Ahmed explains, rubbing two dirty fingers together to emphasize his point.

They drop us at the entrance to Toubas, where a kindly old man offers Nuha and I some tea while we wait for a taxi to come along. It doesn't take long before a car offers to drive us to Nablus for 10 shekels. It's taken us more than three hours to reach the city, which is just 40 kilometres north of our starting point, Jericho.
“Life is difficult here,” Mustafa, our driver, says after listening to a recounting of our journey. “Nablus died when the checkpoints were built.”

As he drives we listen to the latest news on BBC Arabic radio. The new U.S. president-elect, Barrack Obama, apparently has hired Rahm Emmanuel to be his chief of staff. Everyone in the cab notes with a sigh that Emmanuel is Jewish, and therefore likely to side with Israel in the decades-old conflict that has made life in Nablus so miserable.

Mustafa turns to me, taking his eyes off the chaotic Nablus traffic that seems to be coming at us from all directions. “This Obama, do you think he can help us?” he asks.

I give him the standard Palestinian answer to a such a direct, difficult-to-answer, question: “Insha'allah.”
God willing.
Posted by markmac at 8:45 p.m.