To Jerusalem, by bullet-proof bus 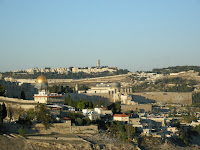 I arrived in Jerusalem today, 30 days after I left it. Fittingly, the final leg of my road was through the most complicated part of the Middle East, and among the Jewish settlers who make it so by insisting on their God-given right to live on land that most of the world recognizes as belonging to the Palestinians.

I rode Egged bus 148 from the heart of the West Bank home to Jerusalem. It's a bus specifically for settlers, and is outfitted with double-paned bulletproof windows to protect it from attack as it rolls through the Palestinian Territories. It doesn't stop in any of the Arab towns along the way.

My fellow passengers, however, were far from stereotypes. While there were indeed religious fundamentalists on the bus, racing to beat the sun - and the beginning of Jewish Sabbath - to the Western Wall in Jerusalem, I spent most of the ride chatting with a young couple who themselves reflected the current divide within Israel.

Both were named Adi, and were students at the college in the West Bank settlement of Ariel. She, Adi Saidoff, is a 22-year-old believer in the idea that the West Bank is part of Greater Israel. A resident of a moshav outside Jerusalem, she said she was proud to go to school in Ariel because it meant she was contributing to the settlement project.

Her 25-year-old boyfriend, Adi Fardouq, was less sure. The son of a prominent member of Israel's left-wing Labour Party, he said he wasn't sure Jews should remain in places like Ariel.

"If we take from them, they will take from us," the deeply tanned engineering student explained before his equally tanned girlfriend, an economics major who hid her eyes behind over-sized sunglasses, interrupted.

"They're sitting on our land," she said, speaking of the Palestinians without mentioning them. "The places where the settlements are need to belong to us."

"I don't think so," he retorted as our bus rolled through the yellow gate of the sprawling Ofra settlement, with its red-roofed homes on a hilltop overlooking Ramallah. "Every time we take land from them, we open this conflict further."

While both were agnostic about the looming Israeli election - a vote that could decide which Adi sees their vision fulfilled - they were both worried by this week's victory by Barrack Obama in the U.S. presidential election.

Falsehoods such as that Obama is a Muslim are commonly repeated here, and Israelis are deeply concerned that he will reverse America's historic support for Israel and instead sympathize with the Palestinians.

Several passengers on the bus said that Israel's very existence - or at least its presence in the West Bank -would be threatened without U.S. backing.

"We can say that Israel exists because of America. They're the ones who liberated the concentration camps, and until now they give us large amounts of money," said Binyamin Lumbre, an 85-year-old who left his native France three years ago - citing rising violence in the suburbs of Paris where he lived - to take up residence in the West Bank settlement of Eli.

"If America doesn't support Israel in the future, if it doesn't give us the money, we'll be in great difficulty."

Which, of course, is exactly the outcome the vast majority of the Muslim and Arab world is hoping for.
Posted by markmac at 8:47 p.m.

This is excellent commentary, and really fun travel writing to boot. You really must expand this for us.

As an aside, I cannot believe you have so few comments.

Carry on! This is great shit.