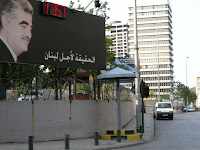 The digital sign looming over the entrance to Beirut's Hamra neighbourhood is persistent, forlorn and accusing. Day 1,357 it says – three years, eight months and 17 days since the massive truck bomb blast that killed Lebanon's popular former prime minister, Rafik Hariri, and 21 others.

It was Feb. 14, 2005, a day that sent Lebanon on a long, downward spiral. Underneath the day counter is a simple plea written in Arabic: "al-haqiqa," it asks. "The truth."

I remember the bombing well. My wife and I were living in Beirut at the time, studying Arabic at the Lebanese American University. We on our lunch break between classes when the explosion shook the walls and windows of our apartment in Hamra. We ran out onto the balcony to see a thick, black pillar of smoke rising into the sky. We soon discovered that our Valentine's Day plans were among the casualties – the blast destroyed the restaurant where we had reserved a table for dinner that evening.

Until that moment, Hariri had been Mr. Lebanon, the man most responsible for bringing an end to the 1975-1990 civil war. He hosted the peace conference that produced the 1989 Taif Accords and rebuilt the country's shattered capital city (Hariri controlled the Solidere company that reconstructed, at great profit, the central district of Beirut that had been the front line during the civil war years).

The Valentine's Day bombing set Lebanon sliding back into the morass of violence and instability that Hariri had almost managed to pull the country out of before his death. His death was blamed by many Lebanese on neighbouring Syria, and the murder sparked the "Cedar Revolution" uprising that eventually forced Syria to withdraw its troops from Lebanon after a 29-year stay.

But the feel-good people-power moment wasn't meant to last. The militant Shia movement Hezbollah never signed on to the pro-Western Cedar Revolution (in fact, it organized its own counter demonstrations that were similar in size) and maintained its close links with both Damascus and Tehran. A year after the Cedar Revolution, Hezbollah staged a cross-border attack on an Israeli patrol that prompted a 34-day war that left an estimated 1,200 Lebanese dead and brought the bad old days back to Lebanon for good.

The country, already deeply divided over the Hariri murder and its fallout, was even further split by the war, with the pro-Western "Cedar" camp on one side, and Hezbollah and it allies on the other. The political standoff escalated later that year into Hezbollah-led street protests against the government of Prime Minister Fouad Siniora and then exploded into open warfare on the streets of Beirut this May when Hezbollah seized the western half of the capital to back its demands for a larger say in government.

The streets of Beirut are calm again now – Rafik Hariri's son Saad recently met with Hezbollah leader Hassan Nasrallah in an effort to resolve some of their many differences – but the murder still hangs over Lebanon's future. Canadian prosecutor Daniel Bellemare, appointed last year by the United Nations to investigate and prosecute the Hariri killing as well as a succession of political assassinations that followed, is due to deliver his final report and prosecutions are expected to follow.

Bellemare's findings – and the potential of high-profile and highly politicized trials at The Hague – will rock the political system here one more time if, as expected, he moves to indict senior figures in Lebanon's former Syrian-friendly government and perhaps in Damascus itself. That could lead to more instability and even more fighting. But it needs to happen nonetheless. This country won't be healed until the Lebanese know who killed Rafik Hariri, and why.
Posted by markmac at 7:04 p.m.