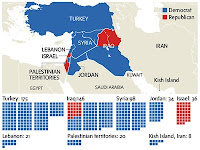 “Mabruk!” the purple-uniformed bellboy shouted at me across the lobby of the Hyatt hotel. “Congratulations!”

To tell him that I wasn't American, and therefore not responsible in any way for electing Barrack Obama yesterday, would have ruined the moment. All day today, Jordanians from all walks of life, as well as some of the Iraqi and Palestinian refugees who now live here, expressed their delight that the United States had chosen – as they see it – to end eight years of confrontation between the West and the Muslim world and to elect someone who appears to be the complete opposite of George W. Bush.

Despite warm ties between Bush and Jordan's King Abdullah II, the last eight years have been unkind to this desert kingdom, which had long been an oasis of calm and stability in a turbulent region. Bush's decision to launch the 2003 invasion of neighbouring Iraq – quietly supported by the Jordanian government – has since driven some 750,000 Iraqis into refuge in Jordan.

The violence tearing Iraq apart spilled over the border in November 2005 when suicide bombers dispatched by the Jordanian-born head of al-Qaeda in Iraq, Abu Musab al-Zarqawi, attacked three hotels on the same night, killing 60 people and targeting the country's vital tourism industry. (The Hyatt hotel was one of those attacked that night. Staying here remains a bit eerie despite the completely refurbished lobby.)

And all that is in addition to the estimated 1.7 million Palestinian refugees (a low-ball estimate) who have lived here for decades. King Abdullah publicly backed both President Bush's failed “road map” to Middle East peace (which was supposed to deliver a Palestinian state by 2005) and the stalled Annapolis peace process that was launched last year. No progress has been made, and the Palestinian refugee population in Jordan continues to grow.

So it's little surprise that Jordanians are as happy to see the end of the Bush era as anyone else in the Middle East. Here's a sampling of what I heard today as I toured Amman, as well as a nearby Palestinian refugee camp and al-Zarqawi's hometown of Zarqa. Only one woman told me that she had hoped to see McCain win, and she said that was because she hated America and “wanted the worst for them.”

“In the Middle East, everybody is happy today. They wanted to see someone different for from Bush and people saw Senator McCain as an extension of Bush. It's not so much for Obama as against an extension for Bush.”

– Jawat Barghouti, a Texan-Palestinian-Jordanian who said he voted for the new president-elect.

“I'm very happy. God willing he will be good for us, for the Palestinian cause. Bush ruined all the world.”

“We have problems no matter who is president. God willing (Obama) will be better if he follows what he say.”

“We don't need Obama or McCain. We just need America to leave us alone.”

So give Jordan and the final 34 seats to Obama, giving him an even more convincing win in our little Middle East Electoral College than he achieved in the real one in the United States.

Why such a wide margin? Well, outside of Israel (where people are worried that a President Obama will be less supportive of the Jewish state and pressure it into accepting a peace deal that includes giving up most of the occupied West Bank) and Iraqi Kurdistan (where Kurds are worried that a hasty withdrawal from Iraq will plunge the country into a civil war that they will not be able to stay out of), Middle Easterners are simply tired of the war and tumult that have marked the Bush years.

Syrians and Iranians are hoping that a President Obama will deliver on his promises to use dialogue instead of force and to meet with those that the Bush Administration ostracized as enemies. Turks want to see an end to the chaos that has spilled over Iraq's borders into their own.

Palestinians and other Arabs are hoping – just as Israel fears – that Obama will be a more neutral arbiter than the openly pro-Israeli President Bush. I repeatedly heard that “war on terror” can't be won unless the U.S. president, whoever that happens to be, first brings an end to the Israeli-Palestinian conflict, which a wide majority of Middle Easterners see as the chief cause of Muslim radicalism.

In other words, the expectations in this battered region could scarcely be any higher, or more difficult to fulfill. But if and when the new president-elect heads down his own “Road to Jerusalem,” he'll begin his journey with all the goodwill he needs.
Posted by markmac at 8:39 p.m.