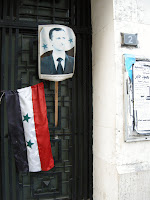 By car from Damascus, Syria to Amman, Jordan - Tuesday, Nov. 4

I found this out last year while working on a series tracing the plight of Iraq's millions of refugees.

I asked for a visa to visit Syria — the country that had absorbed the largest number of Iraqis since 2003 — and was told I was no longer welcome.

The official reason given was that the Syrian regime had discovered that I lived in Jerusalem, and Syria denies visas to all those who have visited what it refers to as Occupied Palestine. But I knew from experience that Syria turns a blind eye to where most journalists are based so long as their coverage is perceived as fair to Bashar Assad and his buddies.

The real problem, a contact of mine in Damascus explained, was that the Ministry of Information had examined my work and found a) that I regularly referred to Bashar Assad as a dictator (Gasp! How dare I?) and b) reported on the alleged connection that United Nations investigators had found between Syria and the murder of former Lebanese prime minister Rafik Hariri.

Guilty on both counts, though the latter simply reporting the UN investigator's findings, not any conclusions of my own. Surely, I protested, other journalists had done the same without getting banned. My contact dug deeper and found the real reason was a favourable portrait I had written back in 2006 of Michel Kilo, the jailed writer who is one of the leaders of Syria's democratic opposition. Apparently the regime saw red when I compared Kilo to the likes of Alexander Solzhenitsyn and Vaclav Havel, dissident writers who were also persecuted, but eventually helped bring down authoritarian regimes in their countries.

Here's the story. Read it again if only because Bashar Assad doesn't want you to.

Despite the ban, I was able — to my own surprise — to enter enter Syria twice in the past week despite the fact that I had no visa, tourist, journalist or otherwise.

When I crossed into Syria last week from Turkey, I was given a three-day pass only after a short interrogation by the border guards. They asked me my profession and whether I'd ever been to Israel. I lied on both counts and they waved me across. Though they had computers, I could see they weren't connected to anything but each other, so there was little risk of being caught. (The Syrian regime is paranoid about the Internet, having banned such sites as Facebook and Hotmail out of fear they could be used to foment dissent. In the information age, such an attitude can damn an entire country, or at least its rulers, to obsolescence.)

Yesterday, I crossed from Lebanon with even less hassle. An uninterested border guard stamped me in for 15 days without making me fill out the standard form. Perhaps he thought I was part of the group of Iraqis driving ahead of me in a white Oldsmobile with red Baghdad license plates who had overtly bribed the customs officials with a bottle of Lebanese arak not to look in their car.

I was quite pleased with myself last night as I wandered the old city of Damascus, chatting with the locals for the story about Syrian attitudes toward the U.S. election that appeared in today's newspaper. I had outsmarted Syria's vaunted intelligence services.

Or at least I thought I had until I arrived today at the Syria-Jordan border. When the guard asked me my profession I told him I was a teacher, the cover story I usually use when entering journalist-unfriendly places like Syria, Belarus and Zimbabwe.

"No you're not," he replied in English before switching to Arabic.

"Inta sahafi," he said accusingly, knowing I'd understand. You're a journalist.

"No," I stammered, leaning forward to try and catch a glimpse of what it said on his computer screen.

He spared me the effort. "Mark MacKinnon, The Globe and Mail, Canadian newspaper," he read.

Busted. Terrifying images of what the inside of a Syrian jail might look like floated through my head.

"Yes, but I'm leaving now," was the only reply I could formulate.

The guard dropped a blue exit stamp into my passport. "That's good for you," he said with a smile.
Posted by markmac at 7:28 p.m.