High times in the Axis of Evil 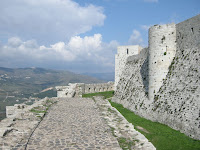 By car from Lattakia, Syria to Tripoli, Lebanon – Thursday, Oct. 30

After three weeks of wandering through Iran, Iraq and Syria, may I humbly present you a brief backpackers' guide to the three of the least-understood countries on the planet:

* Spend a day or more wandering the Old City of Damascus. It's simply one of the most magical places on the planet.
* Pop by the Krak des Chevaliers near the port city of Tartus. I was there today and could have easily spent several more hours than I did wandering what is easily the best-kept Crusader castle in the region. Almost untouched by time, it looks like something out of a fairy tale (see the photo).
* Pack some going-out clothes. Syria may be an honorary Axis of Evil member (I think John Bolton described them as being in a subgroup with Libya and Cuba, sort of like the minor leagues of evil), but that doesn't mean the people don't like to have a good time. Damascus has one of the best nightlife scenes in the Middle East.

* Giggle at all the portraits of President Bashar Assad, even if such enforced adulation is silly in the extreme. I counted 12 of them in one room at the Lebanon-Syria border today, many with slogans like “we're all with you” and “we love you” printed underneath the pictures of the smiling dictator.
* Try and ask Syrians about politics. Nine times out of 10, you'll run into a stone wall. People who say what they think here can easily end up in jail.

* Spend an hour or more touring the ancient citadel overlooking the city of Irbil.
* Go for a stroll in the laid-back Kurdish city of Sulaymaniyah. It's probably the only major city in Iraq where it's safe for a foreigner to walk around on their own, even after dark.
* Pop by the Christian town of Ainkawa, outside of Irbil. The German restaurant there is a pretty good send-up of a Munich beer house. There's a not-too-bad Chinese restaurant (think Manchu Wok) in Sulaymaniyah too.

* Believe everything that you read. The “surge” is indeed working (along with, a more important decision by various Iraqi groups to hold their fire for now) and has reduced the level of violence from the insane heights of the bloodletting in 2006 and 2007 to the merely nutty levels of today, but this is still very much a war zone. Outside of the Kurdish north, it's only safe for a foreigner if you've got trustworthy Iraqi friends and a bulletproof vest. (For a daily tally of the latest violence, check out the Iraq Today website.)
* Leave home without Ciprofloxacin or some other wide-spectrum antibiotic in your kit. I've been to Iraq seven times and have gotten I'd-better-sit-down-and-start-writing-my-will sick on each occasion.

Iran (well, OK, Kish Island, the only part I was allowed to visit):

* Do pull out an English newspaper or book if you're sitting by yourself at dinner. Iranians love showing off their mastery (or bare competency) of foreign languages. You'll be chatting with the locals in no time.
* Book yourself onto one of the dinner-boat cruises that circle this island after dark. It's the best way to see Iranians, in Iran, kicking back and relaxing as much as they're allowed to in the Islamic Republic.
* Check out the Dariush Grand Hotel, which somewhat garishly recalls the grandeur of ancient Persia.

* Show up on Kish Island, hoping to talk your way into a full-fledged Iranian visa. Especially if you only have a Canadian passport.
* Hum the bars to John McCain's new hit song, “Bomb Iran.”

When I set out on this journey, some friends and family back home expressed concerns that I was taking my life into my hands (Iran, Iraq and Syria! Oh my!). And while it's certainly not a route for the faint-hearted, you don't need to be a journalist (actually it's probably better if you aren't, at least in Iran and Syria) to get a lot from such a trip. And while the bus services aren't great in some parts of Iraq and Syria, they're a great way to meet the ordinary people who live in these places and never make the news.

So, economic crisis be damned, call your travel agent now and tell them you want to see the Axis of Evil today. Get there before the American army does.
Posted by markmac at 8:32 p.m.