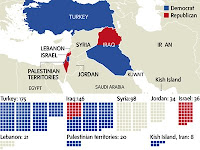 After eight years of being caught in the backdraft of U.S. President George W. Bush's policies, the people of Turkey are angry. Religious Turks are angry about the Iraq war, which Turkey opposed from the start, and about the ever-expanding "war on terrorism," which many here view as a war on Islam.

Despite those perceptions, the Bush Administration was actually a staunch backer of Prime Minster Recep Tayyep Erdogan and his mildly Islamist AK Party, lending support to the government a constitutional crisis in Turkey this year and backing its bid to join the European Union. That disappointed secular Turks, who hoped that the hawkish U.S. administration would understand their fears of the creeping Islamicization of life in Turkey.

And while Kurds in Iraq love Bush (and his father) for bringing down Saddam Hussein and letting loose the genie of Kurdish autonomy, Turkey's Kurds see only a double-standard. The Bush Administration deployed its troops alongside Kurdish militias during the war in Iraq, and has been supporting Iranian Kurdish groups seeking to undermine the regime Tehran. But the PKK, the group fighting for the independence of Turkey's Kurds, was labeled a "terrorist" organization for the first time by the Bush Administration.

In short, Bush managed to offend Turks of all political stripes during his eight years in the White House. As a result, if Turks could cast ballots in the looming U.S. election, they'd vote almost unanimously for change in Washington. And unfortunately for John McCain, they don't buy his maverick schtick. Change, to Turks, means Barrack Obama in the White House.

It was a landslide. Other than a few people who professed to have no opinion about U.S. politics, every single one of the 20-some Turks I asked said that they'd vote for Obama if they could. Not one Turk I spoke to picked McCain.

By and large, Turks think fondly of the Bill Clinton era, and hope that the return of a Democrat to the White House might mean a return to the less confrontational U.S. foreign policy of that era.

Here's a sampling of what I heard:

"[Obama] is an intellectual, and he has new ideas. McCain comes from the same party as Bush – and we don't need to see any more wars."

"When you ask people about George Bush, the first thing they think of is the Iraq war, and the second thing is his relationship with the [Turkish] government and his putting the PKK on the terrorist list."

– Angel Ugar, 23-year-old translator and mother of one.

"Kurds in Turkey have the same problems as black people in the U.S. Because of this, we hope that Obama will understand our situation."

– Abdullah Demirbash, 42-year-old Kurdish politician and the former mayor of the old city of Diyarbakir.

"Black people have suffered a lot in their past. God brought this black person to the biggest country in the world so that maybe he can bring justice to the world."

– Sait Sanli, 64, the "Peace Father" of Diyarbakir. Has eight children of his own

"Obama knows about Muslims, and he has a nice smile."

– Abdul Kerim, a 32-year-old barber and father of three living in the city of Sanliurfa.

So, after mixed results up to now, Obama cleanly sweeps Turkey and the 175 votes I awarded the country in our makeshift electoral college. That means that even though Syria, Lebanon and Jordan have yet to be polled, the Democratic candidate has already passed the magic number of 270 needed to clinch victory in our little "election."

Undaunted, we'll press on, just to make sure Syrians, Lebanese and Jordanians have their say too. But I think I can already guess what many of them will say.

As Timur Schindel, the Turkish-American who owns the fantastic Anadolu Evleri hotel in historic Gaziantep, told me, "Everybody accepts now that the past eight years have been a disaster."
Posted by markmac at 8:18 p.m.

Great post. To the point. Gave a link from our site.

Absolutely wrong. Obama has engaged in very severe anti-Turkish rhetoric during the election process in order to please the anti-Turkish lobbies. What are you smoking, have you actually tuned into the *real* Turkish press to see their reaction to Obama? The people of Turkey are not a naive bunch, they care about what kind of defamation candidates employ about them in order to please the special interest groups that are known for their hatred of Turks.

As a Turk, how can I respect a candidate who will take the anti-Turkish side on everything pertaining to PKK, Cyprus as well as the alleged Armenian Genocide?

Any Kürd origined Türk got all the possibility and right a Türk origined. One should be idiot to compare with African American's.