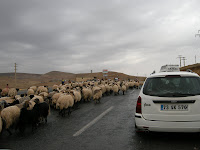 By bus from Gaziantep to Antakya, Turkey - Tuesday, Oct. 28

Number of seats on the ancient white minibus I'm travelling in today across southwestern Turkey: 16

Number of passengers on said bus: 20

Number of people seated on plastic stools in the aisle: 3

Number standing: one tall man bent in half but still hitting his head on the roof from time to time

Number of over-sized bags of cotton in the aisle: 1

Number of smelly canisters that earlier today contained either milk or yogurt: 3

Number of women on the bus: 9

Number of people staring at said Blackberry user as though he were from Pluto: 19
Posted by markmac at 10:22 p.m.

Hey, i have been having alot of problems wit my CPU and its been very slow and i keep getting those Online Spam pop ups where you get those fake virus scans. I also have problems downloading Programs and opening and using certin programs. It ether doesnt open or cant find certin programs. I officially got sick of it when i bought a 200$ iPod Touch and cant use it due to Itunes never being able to install and always stoping and saying theres a problem with windows installer in mid installation. Please Tell me a way to fix my computer! the first person whos answer solves my problem gets 10 points. Thanks you dudes and dudets are my only hope. [url=http://gordoarsnaui.com]santoramaa[/url]