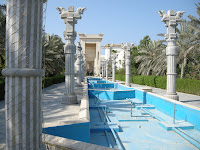 Since arriving on Kish, I’d heard whispers of the Dariush Grand Hotel. If you walk out to the end of the long dock that stretches out into the crystal-clear waters of the Persian Gulf and look back at the island, the five-floor Dariush dominates the skyline.

Built by Iranian businessman Hussein Sabet, who made his fortune in the hotel business in Europe, the 200-room, $125-million Dariush is reputed to be the best hotel in Iran. It’s definitely the most audacious, with giant marble columns and statues built to recall the glory of ancient Persia, the empire that in 500 BC stretched across most of the modern Middle East, to North Africa and what is now Istanbul. The hotel is named after Darius, the man who ruled over the Persian Empire at its height, and the building’s entrance is modeled on the Gate of All Nations at Persepolis, the ancient imperial capital. The door is guarded by a pair of giant stone soldiers, accompanied by fantastical creatures that have the torsos of lions, eagles’ wings, and human heads.

The hotel’s architecture is actually a small act of defiance. After the Islamic Revolution in 1979, references to the country’s pre-Islamic history (Islam came to Iran in the 7th Century AD) fell out of favour, with one prominent cleric even going so far as to suggest that the ruins at Persepolis, a United Nations World Heritage site on a desert plateau some 440 kilometres south of Tehran, should be razed.

It wasn’t, and the mullah’s have recently started to embrace Iran’s pre-Islamic history, understanding above all the tourist dollars that sites such as Persepolis can bring in. Now comes Mr. Sabet’s masterpiece, built on the half-finished shell of an unfinished hotel that started construction back when Shah Mohammed Reza Pahlavi ruled here. The shah famously decided to turn the backwater fishing outpost into a playground for the country’s wealthy elite. A luxury hotel and a grand casino were built, as was an airport big enough to handle the shah’s private Concorde jet, which legendarily would fly in planeloads of prostitutes, and meals prepared at Paris restaurants.

Tempted by the fact the Dariush sports a pool table and no overt ban on knee breaches (as well as the fact as it cost the same as the military bunker I've been staying in up until now), I'm definitely switching digs.
Posted by markmac at 6:38 p.m.