In Canada, we call these places “gay hangouts” 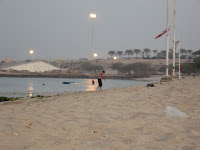 I can’t believe I’m still on Kish Island. I’d hoped to have a visa to head onwards to mainland Iran by now, but that’s starting to seem an increasingly distant prospect. When I went to the Foreign Affairs office today, I was told only that there was “a problem” with my application. This doesn’t look good. I’m terrified that the only corner of Iran I’ll be allowed to see is this bizarre Disneyland of the Persian Gulf.

I’ve already visited the local Dolphinarium, toured the 92-square-kilometre island by bicycle and had dinner aboard a catamaran. Those are all the activities the guide book lists for Kish. This scenic place is starting to feel like my own personal Alcatraz, although I suspect it’s easier to find a drink, and some decent television, inside the actual prison.

I spent the afternoon today at the island’s men-only beach, a place that’s fenced off from the rest of Kish so that nobody in a chador gets lustful at sight of my unsculpted furry chest.

The beach is white sand and the water is wonderfully warm, and clear enough that you can see the marine life swimming around you. But somehow the absence of women and children makes even this stunning place feel like a failed house party, where lots of invitations went out, lots of preparations were made, but no one showed up.

A quartet of young guys from Tehran jump and dive after a volleyball, but no one watches or cheers their feats of athleticism. Men swim alone or in pairs, but no one splashes the water at anyone else or plays tag or even laughs too loudly. It’s serene, it’s beautiful, but it’s no fun at all.
Posted by markmac at 6:53 p.m.