Not without my dateline 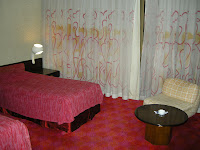 After seven years of covering the Middle East and the ever-expanding “war on terror,” I finally set foot in Iran today. Yes, that place. The one with the crazed nuke-hungry mullahs and the crowds wishing death to America. The geographical centre of George W. Bush’s infamous “Axis of Evil.”

Following repeated efforts to secure a visa to travel to Tehran – and repeatedly rejections on the basis of both my nationality and my profession – I finally discovered a way into the Islamic Republic, or at least a corner of it, while flipping through an old copy of a Lonely Planet guide to the Middle East that has sat, to my wife’s chagrin, in the bathroom for most of the past three years. It was on page 228 that I had my revelation. That’s where I learned of the existence of Kish Island.

Kish Island, the well-thumbed book told me, was the only part of Iran that foreigners – even Canadian journalists – can enter without a visa. Then came the even more tantalizing part: once in Kish “head down to the Ministry of Foreign Affairs where they can grant you a full tourist visa within 48 hours.”

So here I am. On Kish Island, a place that at once poses as both the Hawaii and the Hong Kong of the Islamic Republic, staying in a grey concrete block that looks more like a military bunker than the four-star hotel it alleges to be (that's the interior of my hotel room, top left). In the name of finally getting a visa to Iran, I’m pretending to be that rare breed of Western tourist who prefers destinations where alcohol is illegal and men and women must swim and sunbathe at separate, fenced-off beaches.

The swimming pool at the Shayan Hotel is as dry as the minibar, having been emptied many years ago to make sure no one swam where the opposite sex might catch an illicit glimpse of flesh.

Nonetheless, a green card in the room promises “Happy Day’s (sic) For You.” Inside the card are a set of nine rules. Rule No. 1: “Ladies are requested to respect Islamic covering.” Rule No. 2: “Gentlemen are requested not to wear knee breaches.”

I promise not to leave this island, dear reader, until I find out what a knee breach is.
Posted by markmac at 6:17 p.m.