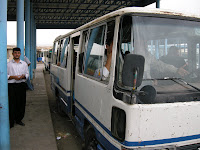 By bus from Sulaymaniyah to Irbil, Iraq – Wednesday, Oct. 22

When I lived in Canada, a road trip meant piling with friends into my green Ford Escort, the windows down and the radio loud as we set off from my hometown of Ottawa to Montreal or Toronto for the weekend. During the years I lived in Russia, a “road trip” usually meant taking the train, speeding between Moscow and St. Petersburg or rolling slowly across the awe-inspiring distances to the east.

In the Middle East, a road trip means military checkpoints. Whether you’re driving between the holy cities of Jerusalem and Bethlehem, heading to the scenic south of Lebanon, or doing what I did today – cutting across the north of war-torn Iraq by bus – hitting the road means spending a large chunk of your journey having your documents and belongings checked by nervous soldiers.

For the three-plus hours the 17 other passengers and I sat crammed into a decades-old Toyota bus, we hit six checkpoints. Two of them were manned by Iraqi army soldiers, the other four by the pershmerga (ready-to-die) militia that is the de facto army of the autonomous Kurdish region in the north of Iraq. By the last of them – when I was asked to get out of the vehicle so that I could be more closely examined by a swarthy soldier with kebab breath – I was even thinking fondly of the Ontario Provincial Police and their nefarious speed traps. Yes, the checkpoints were that aggravating.

The bumpy, 205-kilometre drive from Sulaymaniyah to Irbil was nonetheless as exhilarating in its own way as those weekend rips to Montreal. For the past five years, reporters like me have had to skulk around this country, fearing car bombs and kidnappings. The last time I was in Baghdad (back in March), a colleague and I used four cars between us, hoping that switching vehicles often enough would keep the anonymous bad guys from tracking our movements too closely. Other journalists travel with their own security detachments.

But today my translator and I simply headed down to the main Sulaymaniyah bus station, found a driver who was hollering out “Hawler! Hawler!” (the Kurdish name for Irbil) and hopped aboard. I grabbed a seat between a gregarious 22-year-old peshmerga fighter heading home to Kirkuk and an intense 26-year-old economics graduate going to Irbil. We sat back and chatted the afternoon away as though we were travelling through a completely normal country somewhere else on this planet.

But this wasn’t that other country, as the jolts to our spine that we experienced each time the bus bounced off a pothole reminded us. Saifeddin Shamseddin, the recent economics grad, was bordering on depressed. His degree, he said, meant nothing in a country where there was no work of any kind for young people like him. He had been in Sulaymaniyah filling out the necessary documentation to go to police college – another Iraqi intellectual forced to pick up a gun because there’s nothing else to do.

“No one is happy here. There are thousands of young students who have just graduated and are now sitting at home jobless” he said, his long legs curled up almost to his chin because the bus seats were so close together.

Mohammed Amin, the young peshmerga fighter, nodded in agreement. He confessed that he was saving up money to pay a smuggler to take him, along with his wife and infant daughter, out of Iraq, to London if they could manage it. “It will continue to get worse here day after day,” he predicted. “I’ve lived here 22 years and I have yet to see one happy day in Iraq."
Posted by markmac at 11:17 p.m.