Dreams, and nightmares, of Baghdad 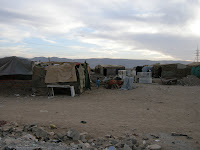 The situation in Iraq is getting better, the statistics say (though the daily blow-by-blow is still mind-numbing to read). By most accounts, Baghdad, an all-out war zone for most of the past five years, is becoming almost livable again.

But don't try telling that to the 300-plus people - almost all of them former Baghdad residents - living in miserable conditions in a refugee camp on the outskirts of Sulaymaniyah. Such rosy talk is nonsense, they say. Returning to their old homes in Baghdad, for them, remains an impossibility.

The stories they tell paint a very different picture than the one emerging of late in the Western media. They don't see an Iraq that's beginning to heal, but instead one where the divisions have become irreparable.

All of the refugees here are Sunni Arabs (Sulaymaniyah is in the Kurdish autonomous region, the majority Kurds are Sunnis) and most of them were driven from their homes by Shia militias during the worst of the sectarian fighting in 2006 and 2007.

It's safe to go back to Baghdad, they say, if it is in a Sunni neighbourhood. If your old home was in a Shia area, there's still no going back.

“I will never go back to Baghdad, It’s impossible for me,” said, Layla Shalan, a widowed 48-year-old mother of six. Wrapped in a head-to-toe black abaya, she told me how she remained in the mixed Dora neighbourhood of Baghdad even after her husband disappeared in 2004, leaving for work one morning and never coming home. She finally fled Dora with her children after Shia gunmen came to her door shortly afterwards and kidnapped her one-year-old daughter Nora, saying they'd return her only when Ms. Shalan and her family vacated their house.

There are dozens of stories like hers in this ramshackle collection of tents in the eastern corner of the Kurdish Autonomous Region. This is a place where optimism is even scarcer than decent food or shelter. Despite the steady stream of good news coming from Baghdad in recent months, the tent city remains home to more than 60 families – making it slightly larger than it was when I last visited here in early 2007.

“If they gave me all of Baghdad, I wouldn’t return. People who say it is getting better are media liars,” Iyad Manfi, the camp's leader, or mukhtar. He moved into one of the shoddy tarps-and-wooden-pole tents here in 2006 after his house near the infamous Abu Ghraib prison was hit by a mysterious explosion. He says he returned to Baghdad once already, believing the security situation had improved, but returned here shortly afterwards after receiving more threats.

Mr. Manfi, whose tense face makes him far older than his 32 years, says returning was a mistake he won’t make again. “When I leave this camp, it will not be to go home. It will be to leave this country.”

That sentiment is common across this battered country. Unsurprising new statistics released by the United Nations High Commission for Refugees today show that while the number of Iraqis seeking asylum in the West has dropped by more than 10 per cent since the same time last year, Iraqis still lodge far more asylum applications than any other nationality.
Posted by markmac at 1:55 a.m.