The plight, and flight, of Iraq's Christians 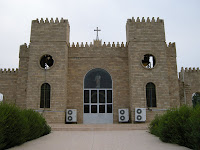 Father Sabri al-Maqdessy is a man with a lot on his mind. A priest at St. Joseph's Chaldean Church in this Christian town in the north of Iraq, he's struggling to keep track of two equally disturbing trends: an influx of new families into his parrish and an outflow of longtime residents.

Neither is a new phenomenon. Since the U.S. invasion in 2003, Christian families have been fleeing to Ainkawa, chased from their homes in Baghdad and elsewhere by Sunni and Shia militants who bombed churches and demanded that Christian women adopt strict Islamic dress. The prewar population of this attractive little town doubled during the first four years of the war as 1,500 families arrived here looking for refuge.

Just as the situation seemed to be stabilizing, a spate of murders in recent weeks targeting the Christian community of the nearby city of Mosul has sparked a new exodus. Another 1,500 families have fled Mosul in the past month, with many of those arriving at St. Josephs, looking for shelter and food.

"Christians have always been targeted by different groups in the Middle East because we are the only people without a tribal system to protect us or the political power to give us security," the bald, soft-spoken priest said as we chatted inside the stone-walled compound of St. Joseph's, which from the street looks as much like a castle than a place of worship. "The church is weak. The Vatican does not have tanks."

Just as worrying for Father Sabri are those who are leaving Ainkawa. Theyre not returning to their homes, but headed for new lives in the West, leaving Iraq behind. As much as half of Iraqs prewar Christian population of 800,000 is believed to have emigrated since 2003.

"Everyone is leaving. If the situation continues the way it is for another 10 years, 20 at most, you won't see any Christians left here."
Posted by markmac at 9:34 a.m.