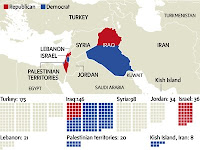 So colour Iraq neither red nor blue. Or rather, colour it either, depending on what part of the country you're talking about.

During the course the week I spent in Northern Iraq, I asked more than two dozen Iraqis whether they'd prefer to see John McCain or Barrack Obama win the White House on Nov. 4.

The results were split almost perfectly down the middle. Most Kurds preferred McCain, seeing him as more likely to support their dream of independence and less likely to withdraw American troops from the country. Kurds, who actually speak with affection of George W. Bush, fear that a U.S. withdrawal would plunge the country into a new civil war that they could not stay out of.

The Arabs I met, however, were more likely to support Obama, believing that he is more likely to adopt different policies than Bush, the man they blame for destroying this country.

Here's a taste of what some of the Iraqis I spoke to had to say on this question:

“We cannot ask the U.S. troops to leave because that will lead to civil war… . Obama's policy is a rapid withdrawal of American troops. This will not benefit the Iraqi people in general.”

– Rahman Gharib, 42, a journalist affiliated with the Communist Party of Kurdistan.

“I prefer the black one. He will pay more attention to the situation in Iraq.”

“I think America needs some change. People get sick and tired of a style, a face or a colour.”

A third opinion which was shared by Arabs and Kurds alike is that it won't make much difference who wins and that Iraq will suffer under either man's leadership.

“Bush destroyed Iraq. He took our oil and gave us nothing in return,” said Ayyad Manfi, the mukhtar, or leader, of a refugee camp near Sulaymaniyah for former Baghdad residents. “We don't believe in this election. Whatever they say, they will change their promises later.”

So, how to award Iraq's 146 electors? My poll was obviously skewed by the fact I was in the Kurdish north of the country. The Arab refugees I spoke to were also uniformly Sunni, meaning this already unscientific poll takes almost no account of the feelings of the country's largest community, the Shiites.

The good news is that not every U.S. state is winner-take-all – and you could argue that Iraq is hardly one country anymore – so I'm doling out the electors based on the most obvious line: McCain has won Iraqi Kurdistan, Obama takes Sunni and Shia Iraq (the latter judgment based on the fact Shia leaders have been nearly unanimous in calling for a speedy U.S. withdrawal from the country, which is closest to Obama's policy). Kurds make up roughly 20 per cent of Iraq's population, so McCain gets 20 per cent of the votes, or 29 electors. Obama gets the remaining 117.

Arbitrary? Perhaps. But I'm the one battling to hold my insides in after eating at an Iraqi roadside diner and spending sleepless nights at the Simpan Hotel, so I get to make the call. You're at home surfing the Internet during a commercial break in Hockey Night in Canada, so you just get to complain about it in the comments section below.

Our running total now shows Obama surging from behind to take the lead:

Next up, Turkey, which has a dominant 175 votes in the 538-seat electoral college.

If Obama wins it, he'll shoot past the 270 mark needed to secure victory, meaning my little polling project could effectively be over long before election day. If McCain wins it, we've got a race to the wire, with Syria, Lebanon and Jordan deciding who takes the prize.